Citing his passion for agriculture, his tenacity, and his decades of service to Farm Bureau, the California Farm Bureau Federation presented its Distinguished Service Award to former CFBF President Paul Wenger. Wenger accepted the award during the organization’s 100th Annual Meeting last night in San Diego.

A third-generation farmer who grows almonds and walnuts on a family farm in Modesto, Wenger served as CFBF president from 2009 to 2017, ending his term after serving the maximum eight years in office. He has been a Stanislaus County Farm Bureau member since 1980, serving as county farm bureau president before being elected to the CFBF board and then as a statewide officer beginning in 1997, when he was elected the organization’s second vice president. Wenger also served on the American Farm Bureau Federation Board of Directors.

Current CFBF President Jamie Johansson described his predecessor as “tireless” in his work on behalf of the farm bureau and California agriculture.

“In his speech to our Annual Meeting last year, Paul reminded us that those who work the hardest, the longest, and invest the most are probably going to be successful. Although he was referring to Farm Bureau, the words certainly apply to Paul himself. He has remained actively involved in Farm Bureau and agriculture, and we look forward to his continued contributions,” Johansson said.

In nominating Wenger for the award, the Stanislaus County Farm Bureau pointed to his “lifetime in leadership roles in agriculture,” starting as a state Future Farmers of America officer in 1973, and cited “his passion for the industry and his tenacity to resolve problems and get things done.”

California Growers in a World Market

Paul Wenger, a Stanislaus County almond and walnut grower told California Ag Today recently  that California growers have often suffered with tariffs. “The proposed trade agreements such as TTIP and TPP along with NAFTA would have helped solve tariff problems,” he said. “But TTIP and TPP are gone.”

“The Trump administration may try to negotiate a bilateral agreement with other countries, and he seems to be working on NAFTA with Mexico,” noted Wenger, who is also the past president of the California Farm Bureau Federation.

At the end of the day, Wenger hopes that calmer minds will persevere and we’ll see these trade negotiations get done and we’ll move forward.

“Because we are in a world market,” Wenger explained. “As much as President Trump puts tariffs on steel and aluminum … saying that we’re going to bring back our rust belt, well, we’re not, because it’s not the market that has killed the steel industry, it has been the regulations. Our steel industry can’t produce at a level that people are willing to pay.”

The central part of Chile can produce a lot of the crops that we have today. But other than that, it’s the south tip of Australia and South Africa and the Mediterranean region itself.

“When you really think about who can produce, as long as we have the water, not only do we have to worry about marketing our product, we have to also fight for our water so we can produce those crops. And long-term, people are going to find a path to California for the crops that we grow here,” Wenger said.

California Ag Today recently spoke with Paul Wenger, past president of the California Farm Bureau Federation. He farms 700 acres of almonds and walnuts in Stanislaus County. He said that California Farmers and other stakeholders of the industry need to be less negative about the current trade war with China.

“Marketing is always a self-fulfilling prophecy and it’s more psychology than it is anything,” Wenger said. “We are one of the largest producers now. Certainly, China is the largest producer. But China had a terrible crop and so they need walnuts, and so strange things can happen and the Chinese are always one that can bend the rules when they need.”

“We know that’s why President Trump has been going after China supposedly over some of these intellectual properties. Certainly, those aren’t the things that hurt agriculture, but we in agriculture are paying the price as we look at these countervailing tariffs that are coming on,” Wenger said.

Wenger explained that the Chinese know that, throughout the Midwest, it was the farm vote that helped and the rural states that helped bring home a victory for the president, so they’re going to go after President Trump.

A large amount of product was sold last season at a low price.

“We just go through the Affordable Care Act and then the port slowdown on the 2015 crop, which went into the 2016 crop, which was a little better We got a little bit better than 2017 crop was a good year for us,” Wenger said. ‘So you’re looking at a pretty good ’18 and now this happens.”

Trade to China is so important to California, and for that reason, the 15 percent added Chinese tariff on ag products is devastating. It’s due to the retaliation of the Trump administration tariff, which he put on steel and aluminum exported by China.

It’s worrisome for growers such as Jeff Colombini, the president of Lodi Farming, with partners that grow cherries, apples, walnuts, and olives. He noted that apples and walnuts are an essential crop to China and he’s concerned.

“Trade is significant to the apple crop for California apples, but particularly for Washington state. Apples in Washington state is the largest producer of apples. They export greater than 25 percent of their crop,” Colombini said.

“Both China and Mexico take apple varieties that have fallen out of favor for U.S. consumers. So really, it’s a match made in heaven,” he said.

Colombini said growers have made decisions over the last 10 to 15 years on planting orchards based on these growing export markets.

“Then when the markets slam shut, what do we do with all this excess production/ This becomes disruptive to the markets … not to mention it significantly affects the farmer’s bottom line,” he explained.

Colombini said apples require a lot of labor—a big economic boost to many communities—and disruption in getting that crop to China is not good.

There’s a lot of people employed in the apple industry throughout the United States, and so a trade war can have a significant impact on many thousands of families.

Colombini said it took many years to get that China market open, and when it finally got opened in 2015, it has grown to be their sixth largest export market.

“Similarly, the export disruptions for walnuts is extremely concerning to that industry,” he said.

California Ag Today recently had the chance to interview Norman Crow a walnut grower and owner of Orestimba Walnut nursery in the Crows Landing area of Stanislaus County.

We asked him about his walnut harvest. “I think everything is going to be late this year. But it looks like a good crop,” Crow said.

“It’s very interesting because the market for the first time in several years is good. There’s no carryover from last year, so, we’re going to see maybe a 25% increase in price,” Crow said.

Crow explained that walnut plantings are not out of control compared to almonds and pistachios. “So we are very optimistic. Plus the dollar is weaker, there is no carryover and there is strong demand for walnuts

Crow is a descendant of Walter, Crow who came out to California from Missouri in 1849 – obviously, for gold. And he had eight children.

“I’m the descendant of one of his eight children, which is John Bradford,” Crow said. “He was my great-great grandfather.”

“And soon after arriving, my family bought Orestimba Rancho, which was a Spanish land grant. It was about 5,000 acres along Orestimba Creek that goes from the San Joaquin River, up the canyon, to the west of I-5.

Orestimba is a Yokut indian word for “the meeting place”.

“My family began farming barley, and they needed to get it to the buyer,” Crow explained.

The Crow’s built two riverboats, which pulled barges, loaded with sacks of barley. The landing was a warehouse on the San Joaquin River. That’s how it was eventually named Crow’s Landing.

“And then, a good family friend of ours, Jack Grisez took care of the ranch for many years, but they actually had a bean warehouse here that’s called Grisez Warehouse,” Crows said. “ Jack Grisez supplied all the dry beans to the GIs during WWII. He was one of the primary packers of beans. So, WWII came along and people started growing – there was a need and a demand and there was money to be made growing row crops. So some of them grew beans, tomatoes and other crops. And others operated dairies in the area.

In 1865, the Crow family began planting walnuts using seeds that the family brought from Missouri. They were from black walnuts, and today there are still may black walnut trees in the area.

And while walnut plantings were expanding throughout California, Norman Crow established a commercial walnut nursery on his ranch and named it Orestimba Nursery, which lies on Orestimba Creek.

Besides farming walnuts and operating a nursery, Crow noted that his family operates two walnut hullers in the area. 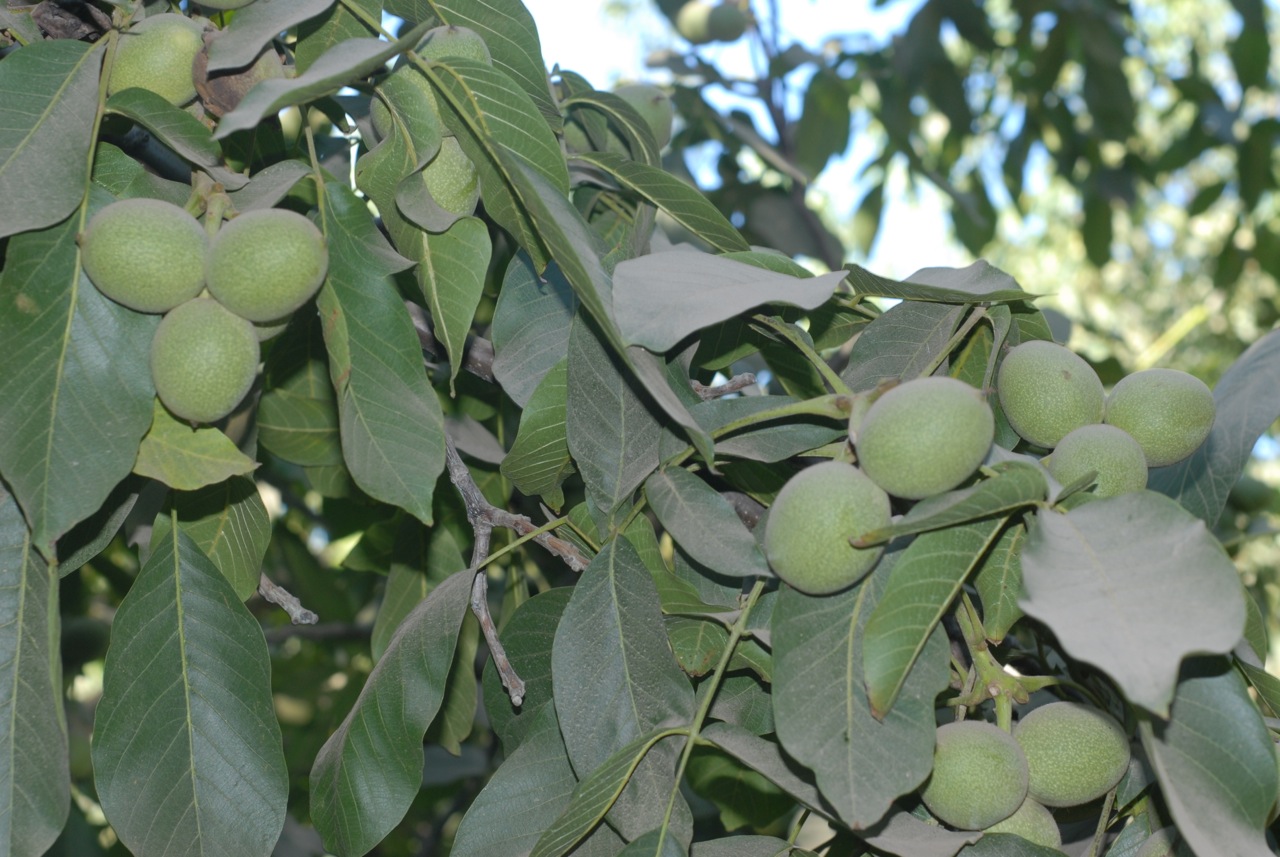 Ninety-five percent of eligible California walnut growers who voted and ninety-three percent of the volume represented in the referendum favored continuing the Federal Marketing Order and the efforts of the California Walnut Board.  This is the first continuation referendum vote ever held by the industry.

Voting in the referendum took place from April 1 through April 19, 2014 and those eligible to vote were growers engaged in the production of walnuts within the state during the period September 1, 2012 through August 31, 2013.  In order for the referendum to pass, at least two-thirds of eligible producers must vote in favor of continuance.  Since the order was amended in 2008, a vote is now required every six years.

“We’re grateful for the continued support of our growers, who see the value of working together to benefit the entire industry,” said Dennis A. Balint, Executive Director of the California Walnut Board. “There is more work ahead, but we’re starting from a good place and will continue to build on several decades of experience, relationships, research and success.”