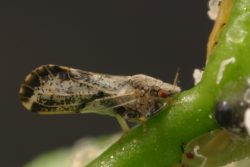 Beth Grafton-Cardwell: Spread of Disease Must Be Prevented

Collaborative changes are being made to combat the Asian Citrus Psyllid (ACP). Beth Grafton-Cardwell is the director of Lindcove Research and Extension Center near Exeter, as well as a research entomologist with UC Riverside. She recently spoke at the 2019 Citrus Showcase in Visalia as a key speaker on the state of Huanglongbing (HLB) in California, with an overview of how to prevent ACP,—which vectors HLB, a fatal disease to citrus—from moving around the state.

“We were trying to communicate why we’ve made the changes we’ve made for the industry that has been a collaborative effort between CDFA, growers, and the university,” Grafton-Cardwell said. “We need better ways to prevent psyllids from moving around the state because they might have HLB in their bodies, and we’ve got to prevent the spread of the disease.”

The Florida citrus industry did not do a great job in containing the Psyllid, and now HLB is rampant in the state’s citrus industry, which has devastated the citrus economy there.

“Florida found that they did not do much to control psyllid movement, and they found that psyllids were moving in bulk citrus bins and retail nursery plants around the state, and within a concise amount of time, they spread the Psyllid and the disease everywhere,” Grafton-Cardwell said. “We’re trying to avoid that. We have 100% tarping of citrus truckloads. We have treatments that have to be done if growers want to move citrus between major zones in California, so that we can prevent that kind of movement.”

Conversations continue about quarantine areas in California to reduce spread.

“There’s been a lot of discussion regarding quarantines because it’s painful for some growers who have low Psyllid numbers to have to treat and to move their fruit to other zones.”

“There’s been a lot of questions. We did a lot of scientific analysis to look at impacts as well as numbers. It’s not just about psyllid numbers; it’s about their impact if growers were to move the disease into a high citrus growing region,” Grafton-Cardwell explained. 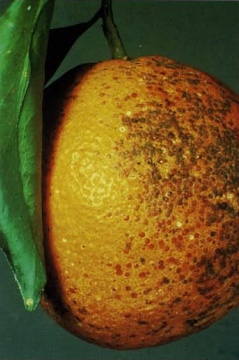 While much of the talk in the citrus industry is about how to fend off Huanglongbing (HLB) disease, one of the most devastating citrus diseases, Dr. Beth Grafton-Cardwell, director of the University of California Agriculture and Natural Resources Lindcove Research and Extension Center, reinforced that HLB isn’t the only pest that can overtake California’s citrus orchards.

Grafton-Cardwell explained how last year’s warm winter led to an increase in the California red scale, Aonidiella aurantii, population. “Normally we have cold conditions that kill off the younger instars of the scales and [basically] restarts the system. But we didn’t really have any low temperatures last year, so the scales didn’t go into their usual hibernating phase. They just kept cranking out crawlers and adding in an extra generation or two of production. So the higher number of scales on the trees made it much more difficult for the growers to control.”

lifornia red scale, “We have already received more moisture as a result of seasonal rainfall, which should help hinder the pest. Hopefully we’ll get some cooler weather conditions too–not freezing because citrus groves don’t like freezing temperatures–but cold enough to knock out some of the scales and get the population back under a manageable level,” she said.

Nevertheless, despite the challenges that California red scale can cause, Grafton-Cardwell said, overall, citrus growers need to keep their focus on the fight against the Asian Citrus Pysllid (ACP), Diaphorina citri, and its ability to spread HLB. “Growers need to start thinking in terms of: California has the [HLB] disease and it’s going to start spreading in southern California soon,” Grafton-Cardwell said. “What do we do to prevent it from spreading up here into the San Joaquin Valley?”