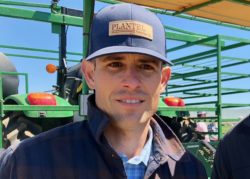 Once again, technology has taken crop production to the next level. This time, strawberry growers are reaping the benefits of technological advancements. Pete Molero and his team at Plantel Nurseries have come up with a transplanting machine that will address labor challenges in the strawberry field.

“We have come up with a transplanting machine that uses a 25-man crew to plant strawberries that have foliage on them and have a plug just like a transplant vegetable plug now,” Molero explained.

He further added that the machine can plant an acre an hour, a pace that would typically take 80 to 100 employees to achieve.

According to Molero, the process is simple.“The plug goes in, the plant gets dirt, and its set and ready to go.”

He described the root itself as a two-and-a-half to three-inch plug with first growth leaves at about three to four inches tall. As of right now, there is only one variety of strawberry available for the summer. However, new ones are being tested in hopes that this new equipment will continue to make improvements. 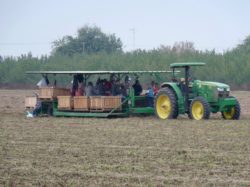 Challenges Are High Demand for Innovation

Harvest for sweet potatoes is in full swing, which means long hours and high labor expenses for producers. Scott Stoddard, of the UC Cooperative Extension in Merced County, knows the difficult task at hand in managing time and money.

With new overtime laws in place, the extended work days during harvest can be costly to farmers. With insight into several operations, Stoddard explained, “Everybody is crunched and trying to get as much as they possibly can get done in a day.”

However, this isn’t the only issue farmers are facing, because although hourly pay is on the rise, labor is becoming more difficult to find.

Stoddard said, “I had a guy tell me last week when I was harvesting sweet potatoes that it is getting a little bit harder to find labor.”

All of these factors, he concluded, are driving forces for mechanical innovation.

Innovation and new pieces of equipment are continuing to “shake up” the industry, Stoddard noted. In a typical operation, it takes two passes in sweet potato fields to eliminate excess vines leading up to harvest. Stoddard said that the new machine is capable of removing vines pre-harvest in just one pass.

“It helps get rid of the extra little vines that are still left over after you flail mow the crop,” he explained.

Although this machine is costly, according to Stoddard, it is estimated to save about one person per harvester, which in the big picture can add up.

“It’s a little tweaking of the system, which will make sweet potato harvest more labor efficient.” 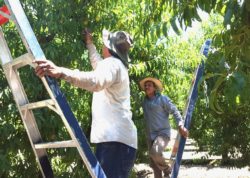 Many Big Labor Topics to be discussed

“We’re going to discuss hot topics in agriculture, oil, and transportation, such as I-9 audits—what to do when ICE show us up and the onerous wage and hour traps,” said Jesse Rojas, with the Redd Group. “We will focus on all that red tape, and burdensome regulations that businesses in California deal with every day.”

Registration required. For more information and to register for the workshop, call Jesse Rojas at 844-946-7333 or email jesse@reddgroup.org.

There is a big concern regarding the ongoing labor issues. These issues don’t just affect apples and blueberries, but other commodities as well. The increased rules and regulations in California are one component to the decrease in labor.

“You have all of the new rules, whether it be mandatory increase in wages, that obviously inflate a lot of the other wages that are currently already in existence,” Ott said.

Another cause is that they have done away with the ag exemption overtime. With all of the stress following that change, the stress is put on the labor and in this type of situation, the labor decreases.

“I think it is a combination of a lot more increased enforcement of what is going on down at the border, and as a result, you see a lot of folks that just are not available to work,” Ott explained. “Many workers will decide to just not go to work. Not only is the stress on the labor, but the growers as well. If the grower does not increase what he is bringing in, it makes it very difficult to pay the increased costs.”

Karen Ross, secretary of the California Department of Food and Agriculture, spoke to California Ag Today recently about the two big challenges regarding California agriculture.

“[The] two biggest challenges we have are labor and water. Some days, labor’s number one and water’s number two, but they’re both always right up there,” she said.

Ross spoke at the recent California Citrus Conference in Visalia.

“I think for the future, water is very key to how we’ll grow. I think it’s important for people to think about how we farm in this state,” she said. “We farm to extremely high environmental standards, and extremely high labor standards. Those are responsibilities that we have taken on. I certainly hope that people will continue to buy California to reward that kind of stewardship, because it comes with a price.”

Ross noted that investment is key with labor, automation and water.

“We just have to get through a couple of really big, challenging issues,” she explained. “Automation’s going to definitely be more of our future, and as we invest in that automation, we have to make sure we’re concurrently investing in the workforce skills development to go with it, because they will be different jobs.”

“When it comes to water, the renewed focus on how do we do intentional groundwater recharge as part of making the sustainable groundwater management actually work in our basins is going to be an exciting opportunity for us,” she said.