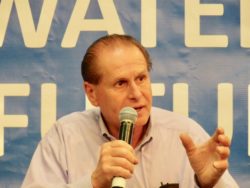 Nisei Farmers League: It Was A Bold Move

“We want to thank President Trump, Congressman Devin Nunes, and the entire Valley delegation for their efforts that will improve the lives of many, especially in the San Joaquin Valley,” Cunha stated.

There will be a strict timetable for rewriting the biological opinion that caused millions of acre-feet of water that would have been used in the San Joaquin Valley to be flushed out to the ocean. This action prioritizes building water storage projects that are badly needed.

This bold move is a welcome announcement to farmers, families, and communities throughout California who have suffered through many dry years and have been harmed by the Endangered Species Act, which reduced much-needed water supplies to restore fish populations.

“I would like to thank Mario Santoyo and the California Latino Water Coalition for leading the ‘March for Water’ in 2009 that started the ‘turn on the pump’ effort to bring additional surface water supplies to our Valley. It has taken 9 years to get to this point, but we never gave up,” Cunha said.

It is a good day for California, for our hard-working families, and for our communities.

“We are definitely in one of the worst drought situations that has happened in recent times. But the fact is, the 1977 drought was actually worse than where we are now. But this year, we’re at a zero water allocation and in ’77 we were at 25% for both the Eastside and Westside. So what’s the difference? Well, it boils down to the differences that are now dedicating a whole bunch of water to environment use, but the environment is not being held accountable for its usage,” Santoyo said.

“Cities and agriculture have had to be very accountable for their water usage and efficiency. It’s not the same for the environment, and so I’m hoping people will understand this discrepancy when we push to reallocate some of the water back to the cities and farms. We must hold environmental water use accountable!”

Santoyo noted the critical importance of building new water storage projects. “We have been working on this for a long time, and we just can’t afford to continue losing millions and millions of acre-feet of water to the ocean during times like this, when we could use that water. We need everyone to understand they have a role in communicating to the state government that we must advance our storage capacity.“

Santoyo noted, “Farmworker communities are doing a lot worse because, again, zero allocation on both the Eastside and Westside quickly translates into fallowed land, which means there are fewer jobs available. So farmworkers now find themselves in an extremely difficult position in which they either stick around and hope for the best or they leave. But once they leave, they aren’t coming back,” he said.

And, that makes life tough for the farmworkers, but it also makes it tough for the farmers because they need water and labor. You can’t do without both, and the lack of one causes problems with the other; if you don’t have water, you lose the labor, and then what do you do? So, it’s unfortunate that some changes in the way we are using water today have changed the entire landscape of agriculture here in the Central Valley.”

In terms of what we can do, Santoyo urged Californians never to give up. “There’s no reason why we all cannot write letters to our representatives and to the governor! Wake him up! Tell him, ‘Hey by the way, you’re supposed to represent us and step to the plate. Have better control over State Water Resources Control Board because they are making tons of mistakes.’ Governor Brown must start making the right decisions for the people.”

Two big fights – one for water and the other in the ring – will be in the spotlight Friday afternoon in Fresno during a media day featuring valley boxer Jose Ramirez and a news conference in which Central California’s rapidly worsening water crisis will be the focus of California Latino Water Coalition leaders and several valley elected officials during a news conference.

The Latino Water Coalition is co-sponsoring the May 17 bout featuring U.S. Olympian Ramirez at Fresno’s Selland Arena as “Fight for Water II,” to help call national attention to the total lack of water supplies now threatening large portions of the San Joaquin Valley’s East Side and West Side. Ramirez is a Coalition member.

The news conference and Fight for Water media event will take place:

ON BLACKSTONE BETWEEN SHAW AND BARSTOW AVENUES.

“This news conference will include statements by some of our local elected officials whose constituents are most at risk from economic and social disaster this summer because of the zero water allocations still in place over millions of acres along the valley’s West Side and East Side,” said Mario Santoyo, Latino Water Coalition Executive Director. “Don’t be surprised if what these county supervisors and mayors have to say to the federal and state governments is strong. Aside from some drought relief and eased regulations, there really hasn’t been much movement toward getting growers at least some supply to keep permanent plantings alive. The bottom line is we still have no water, trees and vines are about to start dying and valley people – particularly Latinos – will be hurting.”

Among the confirmed speakers are Fresno County Supervisors Phil Larson and Judy Case McNairy. They represent portions of western Fresno County and along the county’s East Side that would be hardest hit by a zero allocation.

Mayor Gabriel Jiminez of Orange Cove, an East Side community in the heart of an incredibly productive citrus region that has very little groundwater to cushion the total lack of Central Valley Project surface water supplies, will discuss his community’s worsening dilemma.

The City of Orange Cove itself relies totally on Friant-Kern Canal deliveries for municipal supplies and is going to have make do with a much reduced emergency supply of health and safety water arranged by the Bureau of Reclamation and Fresno Irrigation District.

While the prospect of massive economic losses and social problems caused by a lack of water is confronting Orange Cove and the East Side, such difficulties are much too familiar to Mendota Mayor Robert Silva.

He will speak on how Mendota is grimly preparing for another year of extreme water curtailments in the CVP’s nearby San Luis Unit, including the Westlands Water District. Unemployment is growing rapidly, fields are being fallowed and businesses and residents are struggling financially.

Cannon Michael, who farms east of Los Banos, will represent the San Joaquin River Exchange Contractors. A representative of California Citrus Mutual will explain the problems being faced by citrus growers along the East Side.