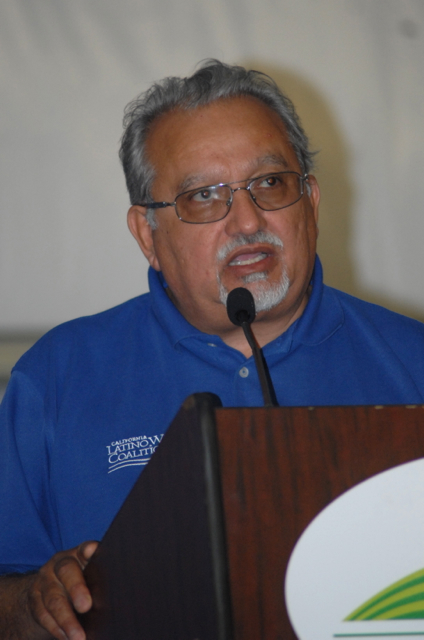 “We are definitely in one of the worst drought situations that has happened in recent times. But the fact is, the 1977 drought was actually worse than where we are now. But this year, we're at a zero water allocation and in '77 we were at 25% for both the Eastside and Westside. So what’s the difference? Well, it boils down to the differences that are now dedicating a whole bunch of water to environment use, but the environment is not being held accountable for its usage,” Santoyo said.

“Cities and agriculture have had to be very accountable for their water usage and efficiency. It’s not the same for the environment, and so I’m hoping people will understand this discrepancy when we push to reallocate some of the water back to the cities and farms. We must hold environmental water use accountable!"

Santoyo noted the critical importance of building new water storage projects. “We have been working on this for a long time, and we just can’t afford to continue losing millions and millions of acre-feet of water to the ocean during times like this, when we could use that water. We need everyone to understand they have a role in communicating to the state government that we must advance our storage capacity."

Santoyo noted, "Farmworker communities are doing a lot worse because, again, zero allocation on both the Eastside and Westside quickly translates into fallowed land, which means there are fewer jobs available. So farmworkers now find themselves in an extremely difficult position in which they either stick around and hope for the best or they leave. But once they leave, they aren’t coming back,” he said.

And, that makes life tough for the farmworkers, but it also makes it tough for the farmers because they need water and labor. You can’t do without both, and the lack of one causes problems with the other; if you don’t have water, you lose the labor, and then what do you do? So, it’s unfortunate that some changes in the way we are using water today have changed the entire landscape of agriculture here in the Central Valley."

In terms of what we can do, Santoyo urged Californians never to give up. "There’s no reason why we all cannot write letters to our representatives and to the governor! Wake him up! Tell him, 'Hey by the way, you’re supposed to represent us and step to the plate. Have better control over State Water Resources Control Board because they are making tons of mistakes.' Governor Brown must start making the right decisions for the people."