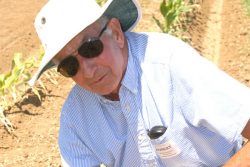 “I’ve been a botanist since I was 14 years old,” Norris said, “and I still have a lot of passion regarding weed control.” Norris has a strong and steady philosophy on weed control and it all comes down to seeds. “The last 25 years of my work, I looked at population dynamics of weeds, like seed longevity in the soil and what we call the size of the seed bank also known as the seed production by weeds. That’s really where I spent most of my time.

“I found that most people have a very poor idea of how many seeds are produced by a weed. This led me to question some of our current management philosophies; namely, the one that comes out of entomology—the use of thresholds (or how many weeds need to be present before treating them),” noted Norris. “I felt that for weed science, thresholds were not the way to go, and my position has been vindicated by the problems we’ve run into using thresholds.”

Norris offered the example, “Barnyard grasses are probably one of our most serious summer grass weeds. A small plant can produce 100,000 seeds; while a big plant, well over a million. I can remember going put in a tomato field years ago and looking at one barnyard grass plant. Because I had been working with it, I can say that plant probably put out 50,000 seeds. If you spread those seeds around an acre, that’s enough to give you serious yield loss the next year,” Norris explained. “Again, that’s one plant, spread out over an acre. Obviously its seeds wouldn’t spread over an acre [on their own], but with our tillage equipment we would move it around quite a bit.”

“My bottom line for about 30 years now is: Don’t let the weeds set seed. Whatever it takes, don’t let them set seed,” Norris said. If you follow that philosophy, Norris said after a while you drive the seed bank down.

“Many people don’t realize this, but some of our really big growers got on to it a long time ago. One farming operation I worked with for years, J. G. Boswell Co., with most of its land in Kings County. “I knew the manager in the late ’50s, into the ’70s. He now is retired now, but he came to this conclusion himself back in the late ’50s,” Norris said. “I haven’t been on Boswell’s property now for 20 years, because I retired. However, if you go down there, you will not see a weed problem, at least not like most growers.”

“The difficulty really is, in order to carry out this philosophy, you need to use hand labor for weed management and it is becoming less and less easy to find,” explained Norris. “Most weed management is done on a one-year one-crop basis; whereas, the type of management we’re talking about where we’re really thinking seed bank dynamics, has to be done over multiple years. Another big problem that I still see is if you miss one year, you can undo 5 to 10 years of what you’ve just been doing, because of this high seed output,” he said. 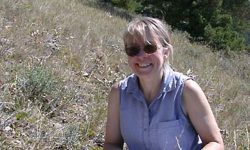