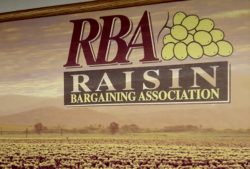 The Board of Directors of the Fresno-based Raisin Bargaining Association have offered to sell the 2018 Natural Seedless Raisin Crop for $2,250.00 per ton. Also, the board has offered to sell both the 2018 & 2019 crops for $2,150.00 per ton. This 2-year Memorandum of Understanding (M.O.U.) at $2,150.00 per ton has safeguards in it for the second year in case there are changes that could force the raisin price to go higher or lower, with a lower bottom not to fall below $2,000.00 per ton.

Last year, they had 12 signatory packers agree to the M.O.U. negotiated at $1,800.00 per ton. This year, they have been instructed that Sun-Maid has rejected both the $2,250.00 one year contract and the $2,150.00 two year contract. They have also advised the RBA to try and move the 2,000 tons of RBA growers to other packers, which we are in the process of doing.

In the discussion with the packers who have not agreed to M.O.U. terms, their arguments were that the $2,250.00 price was too high and the $2,150.00 price was acceptable but not for 2 years. Discussions will continue until Friday, October 12. For updates please go to our website at www.RaisinBargainingAssociation.com and click on the “From the Office” tab.

Mariani Served as Chair of the Safe Food Alliance

The Mariani Packing Company is one of the largest specialty crop growers and handlers in the state, packing many different types of fruit on a massive scale. California Ag Today recently spoke with Mark Mariani, executive chairman of the Mariani packing company in Vacaville and the outgoing chairman of the Safe Food Alliance (SFA), an organization specializing in food safety among growers, packers, and processers to maintain high standards of food safety and prevent consumer illness.

Mariani said that the products that they bring in from Mexico are held to the same standard as produce grown inside the United States. Consumers always look back at the supplier when it comes to food safety, so they ensure that standards meet or exceed the U.S. standards.

Mariani reflected on his part in the Safe Food Alliance organization.

“It’s an exciting time for DFA (which still stands as an entity as it’s being morphed into the Safe Food Alliance) because of the growth and the fact that it is offering so many more services to our members. We recognize that for us to move forward as an industry, we have to be better than anyone else and especially foreign competition,” he said. “And you do that because you can create trust, and I think there’s a solid brand with SFA ,if you’ve been approved and a member … that you are operating within the SFA conditions.”

As the former chairman of SFA, Mariani enjoyed working with passionate people.

“The individuals in the DFA and SFA are passionate people that want to do and exceed the expectations or their members. And most importantly, you want to provide safe food for consumers,” Mariani said.

The new Chair of Safe Food Alliance is Dane Lance, President and CEO of Sunsweet Growers, the world’s largest and most famous brand of dried tree fruits including prunes, apricots, and mangos.

Kalem Barserian: Raisin Production is Down

The California raisin industry’s having a tough year on production, as well as a few rainstorms that impacted the crop.

Kalem Barserian is CEO of the Raisin Bargaining Association in Fresno, an organization that goes to bat for growers when it comes to pricing. He noted a phenomenon that happens when it rains a lot, just ahead of Thompson seedless bud break as the vines came out of dormancy.

“For some reason, with all the rain – and I could go back 60, 70 years and show where ever there was a heavy rain year, the plants seemed to take a rest – and this was no different than what happened in 1998, when we had 20 inches of rain and we had only 7.5 grain tons, while the average green tonnage is 9.5 tons,” Barserian explained.

“The grape set was among the lowest in history, with only 27 bunches per vine. … The historical average is 39 bunches.”

“And then during the late summer, on Sept. 11 and Sept. 21, two rainstorms came through and tested the rain grower’s patience,” Barserian said. “The moisture did not cause the problem to the drying grapes. However the rain caused sand to bounce up on the trays with the grapes. The sand got into the wrinkles of the grapes and as they dried down further, it became embedded sand.”

“This is where the loss for the grower comes, because the damaged, embedded sand grapes must be reconstituted, reconditioned and cleaned up again. Ultimately, the quality is okay, but it is an additional cost to the grower,” Barserian explained.

Many growers have traded in the raisin vineyard for other profitable crops such as almond or mandarins. 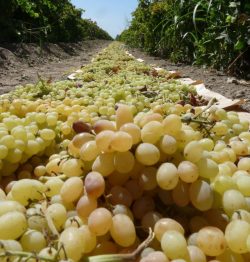 After last year’s tremendously successful raisin harvest, Steve Spate a fourth generation farmer, said it is understandable to see a bit of a decline in tonnage this year. Spate, who is also a grower representative for the Raisin Bargaining Association (RBA), which has been representing the raisin industry for nearly 50 years, said, “Just by nature, the year following a high crop year could potentially be down—especially for Thompson Seedless Grapes,” noted Spate.

Raisin grape harvest in the central San Joaquin Valley is a two-month process for growers, typically running from late August to mid-to-late October, depending on crop maturity. Hard numbers on this year’s overall crop won’t be available for a few more months, but growers are reporting a significant decline from last year’s harvest. “Last year was a large crop,” said Spate,” so definitely we were considering that this year would be down—but not as severely as some growers have reported. We have people reporting differences in yield from 10% to as high as almost 50%.”

There are various possible reasons for this year’s drop in yield, aside from the cyclical nature of grapevines. “I think drought conditions last year may have played a big role, while the buds were setting basically for this year,” said Spate. He also suggested water was a significant factor this year as well, particularly if growers lacked enough surface water deliveries or a grower had a pump issue and there was a critical time where he or she didn’t get water on the field.

The overall reduction in acreage of this year’s harvest is yet another factor to consider. Industry experts report approximately 10K to 15K fewer raisin grape acres compared to last year. This shrinkage is attributed to growers replacing raisin crops with higher-value crops such as almonds.

“I think we will continue to see shifts towards any type of mechanization possible due to some of those minimum wage [increases].” Before the governor signed the overtime bill, Spate said, “We used to have the ability to have workers work longer hours before overtime kicked in.”