Dramatically helping to recharge groundwater storage is one of the major benefits of the proposal to build Temperance Flat Dam behind Friant Dam, located to the north and east of Fresno. The new dam would triple the storage that is currently available with Friant Dam. Mario Santoyo, the executive director of the San Joaquin Water Authority, is helping the organization prepare the package to submit to the Water Commission by the August 14 deadline.

“We will be making timed releases to various water districts and amenities that will have groundwater recharging basins,” Santoyo said. “First, we need storage and then some time to move above ground water to underground storage. This is a physics necessity and directly counters those who argue we should not build above ground infrastructure if we need only underground storage. Well, if you don’t have above ground water storage, you ain’t putting any below. It is as simple as that.”

“There are two water conveyances from Friant and [the proposed] Temperance Flat Dams: the Friant-Kern Canal – the longest of the two primary canals – and the Madera Canal. Friant moves water south to Bakersfield, and Madera conveys it north to Chowchilla.”

“We will have one of the strongest applications to receive monies,” said Santoyo, assuring that the water authority will receive the package on time.

Now this is important,” Santoyo stressed. “A new video, ‘Build Temperance Flat,’ is now on YouTube. The video aims to educate Californians on the importance of building Temperance Flat Dam.” Santoyo urges those who are on social media to send the URL: https://www.youtube.com/watch?v=f30o_dQNmn8  “to as many people as you can!” 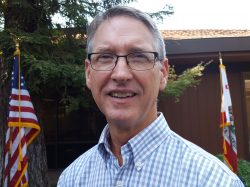 The San Joaquin Valley Weather Infrastructure Authority (SJVWIA), a Joint Power of Authority composed of many San Joaquin Valley cities, counties and water agencies, is charged with the goals of ensuring completion of the Temperance Flat Dam feasibility studies and preparing the necessary bond funding application to get the structure built.

Stephen Worthley, president of the SJVWIA and member of the Tulare County Board of Supervisors said, “The big step for us is going to be the preparation of the application, which has to go to the Water Commission in a little less than one year’s time. So the important focus is to bring together a plan, present it in a way that will make sense to the Commission so they see this project as we envision it—a transformative project for the irrigation waters and the communities of the Central Valley.”

Worthley said when Temperance Flat is built it will be a monumental event. “It would be the first water infrastructure to be built in California in 50 years. It is unique because it will triple the storage capacity of Millerton Lake behind Friant Dam and it will have the unique ability to send water both north and south if needed.”

“This is why the feasibility study done by the Bureau of Reclamation was so important. They came back with the finding of feasibility and that’s what has to happen,” noted Worthley.
“In order to get the funding from Proposition 1, we’re going to have to demonstrate that this project is feasible and it is; and Friant Dam that will be in front of the Temperance Flat dam is just uniquely situated to provide water going north, either in a channel of the San Joaquin River, which may be able to be recaptured and returned south, or along the existing canal, which runs from the Madera Canal, which runs north.

Currently, most water flowing through Friant Dam moves southward through the Friant-Kern Canal.

“And with the extra water that will be provided by Temperance Flat dam is will enable us to major projects throughout the San Joaquin Valley, which is really critical,” said Worthley. “At the end of the day, I think the recharge is going to be as important, if not more so, than the storage and when you look at the feasibility study that was done by the Bureau of Reclamation, that was just purely on storage. They weren’t even considering recharge, so recharge is a whole new addition to that.”

“There are many opportunities of recharge that will be necessary to maintain agricultural pursuit in the San Joaquin Valley because with the Sustainable Groundwater Act, otherwise, without new water, you’re going to see many areas that rely entirely on pumping, are going to have to curtail their operations, either by fallowing the land or farming in a different fashion where they get by with less water,” said Worthley.

“With the drought and severe environmental restrictions, our valley surface water has been critically restricted. That happens two ways. One, of course, is that most of these, well, really all of our communities have their origin in and their continued existence in agriculture so agriculture production is critical to these communities even existing and continuing to exist, but beyond that is the direct need. That’s an indirect benefit, but the direct benefit is that these communities that rely upon Friant water for their potable water supplies, this is going to be a reliable water supply because right now they don’t have reliability,” said Worthley.