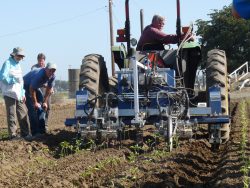 A machine that mechanically removes weeds from the rows of lettuce and other crops and thereby saves costly labor bills, is now commercially available. “The Robovator, made by F. Poulsen Engineering ApS in Denmark, works amazingly well,” said Steve Fennimore, weed specialist, UC Agricultural and Natural Resources Cooperative Extension, Salinas. Fennimore said companies in Scandinavia have had more incentive to develop labor-saving machines after having faced many major labor shortages, as well as significant restrictions on pesticide use throughout the European Union, including the use of herbicides.

Meanwhile, significant domestic demand for organic tomatoes and tomato sauce makes hand-weeding especially necessary. California fields of tomatoes and lettuce, among other crops, often have lines of workers using hoes to briskly cut away the weeds or thin the crop. “Including thinning, there are three passes of labor in organic lettuce,” said Fennimore.

“The Robovator is an intelligent machine with cameras and a computer processor onboard to direct reciprocating knives to open and close,” Fennimore began. “It can follow the pattern in the plant line and the knife mechanism moves sideways (in and out) as it goes down the row. The knives delve generally ¾ inch into the ground, open as they pass a tomato or lettuce plant and close in between to dig up the weed.”

“It worked really well in the lettuce plants,” Fennimore commented, “where you have that 18-inch spacing, double planted on a bed. Everything was going so well in the double-row bed, we told the tractor driver to kick it up a notch and see what we could do—of course, with the grower right there,” Fennimore said. “So he stepped on it and got up to five mph. It was so fast that we could not see the knives move,” he said.

“I don’t think it is totally perfected, but it is commercially good,” said Fennimore. “Of course everything can be improved, but unlike an herbicide— which is a molecule that you cannot alter— this is a machine that can be modified. You can make the knives longer or bend a shoe a little to get better performance, which is nice,” he added.

“If you get the weeds when they are small, such as nightshade, pigweed, or purslane, the machine just pops them right out of the ground, flipping them upside down so their roots are up. In Europe, especially on organic lettuce where they cannot use herbicides, producers typically send in a crew with hoes as often as once per week, and it’s an expensive labor force. Instead, growers are letting the crop grow, coming through with the machine every 7 to 10 days to kill emerging weed flushes and doing a great job,” said Fennimore.

“So far, we have used the machine on tomatoes, broccoli, lettuce and celery here,” he listed, “and we are starting to look at peppers. And I know that the Europeans have used it in cabbage, onions, and radishes. The machine has done a good job without injuring the plants. With transplanted tomatoes, the plants are much bigger than the cotyledon stage of a weed [before it reaches one inch in height]. So the knives stay open around tomato plants but then close over the weeds, which basically uproots them.”

“You always have to be aware of the safety zone,” Fennimore cautioned. “If the crop is getting bigger and has roots near the surface, the knives need to stay back and you will not get all the weeds. The problem weeds in a halo right around the plant stem are the most difficult and most expensive to get. If you force the knifes in and try to get really close, you will probably not be able to go five mph. You will have to go slower to allow the machine to kick out the weeds near the stem.”

Fennimore mentioned two Poulsen ApS machines are presently in use in California and another mechanical weeding machine made by Steketee IC (intelligent cultivator) from The Netherlands is being tested in the Salinas Valley,” Fennimore noted. Teams are attempting to determine how the machine could be improved for use here, and the machines are becoming available for growers to test.

The biggest crowd that has observed the Poulsen Robovator was at the UC Davis Weed Day in 2015. “We have also been going to individual farms, showing it to farmers and explaining what it does,” said Fennimore. “We brought the machine to a Ventura lettuce farm about a month ago, and a few weeks ago we had it in tomatoes,” he noted.

Even on conventional vegetable farms, hand-hoeing is often done due to the lack of adequate herbicides. “We do not have a good spectrum of coverage,” said Fennimore, “and there are unsolved weed problems that are going to be hard to untangle.”

The development cost of the original machine prototype, the most expensive phase, was $11 to 15 million, as compared to the $250 to 300 million necessary to get an herbicide to label. And since 2010, only four new active herbicide ingredients have been developed worldwide. For lettuce applications, the last new herbicide was introduced about 40 years ago.

Yet another machine in development that Fennimore recently read about is essentially a weed-punch machine with electronics by Deepfield Robotics, a Bosch start-up company in Germany. “These guys drive through the fields, the machine finds the weeds and instantly punches them dead-center into the ground,” he elaborated.

Fennimore considered using such machinery on fields of garlic, onions or spinach that are densely planted, where back and forth knives would not work well. He theorized that machinery that can distinguished the weeds from the crop might work simply by punching the weed down into the soil where it’s not going to thrive. But perfecting this prototype is going very slowly, as it must accommodate a variation of cameras, weeds and crops. Yet, Fennimore expressed optimism, “I see a lot of potential with this type of technology because it can be modified.”