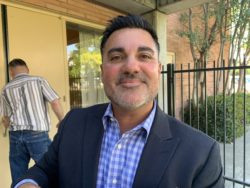 An important blueprint for the success of farming in the Central Valley is being developed to present to California government officials. This blueprint outlines what must be done to get water to the eight counties south of the delta. The blueprint is a critical step to help keep farmers in business due to the pressure from the Sustainable Groundwater Management Act.

“I remember this isn’t just about farmers. This entire Central Valley depends on a functioning water system. Whether you are a farm owner, a farm worker, a city councilman or somebody who works at a milk plant or at a library, it doesn’t matter,” he said. “San Joaquin Valley is in this together, and it is an all or nothing situation. This is being labeled as a farmer-led effort, and it is misleading.”

“This is a very broad coalition of very unusual interests coming together to promote this,” Amaral said.

The Bureau of Reclamation announced an initial 2017 water allocation for the Central Valley Project, and it’s considerably lower than what was expected.  Despite a wet winter and a significant snowpack, the Bureau has only allocated 65 percent of their contract supply to South-of-Delta contractors.

Johnny Amaral is the Deputy General Manager for the Westlands Water District – the largest agricultural water district in the United States.  Amaral thinks the deck is stacked against area growers as a result of water policy. “There are laws on the books that were deliberately put into place that created this bottleneck in the CVP and have hamstrung the CVP. This is the outcome that you get when you purposely curtail project operations or pumping: You get shortages,” Amaral said.

The 65 percent allocation is especially disheartening since the announcement was not released until well into the planting season, forcing farmers to make decisions about land use and labor without any assurance of water supplies.  Amaral thinks there’s a need for a serious policy discussion as to whether the government truly values what growers produce.  “Those laws are going to have to be changed if we’re ever going to restore water supply to a situation where the westside ag contractors get 100 percent,” Amaral said.

Westlands Water District is made up of more than 1,000 square miles of premier farmland in western Fresno and Kings counties and provides water to 700 family-owned farms, averaging about 875 acres in size.  Amaral believes that it is time for legislators to reevaluate their priorities.  “It really comes down to a very simple but more fundamental policy question about, ‘Do we value being able to grow our own food in a safe way? Does that matter to people?’ ” Amaral said.

During election season last fall, then-candidate Donald Trump vowed to fix the water problems in California.  Farmers are going to need to be patient in their desire to see some action on those promises. “The agencies that have direct influence over western water issues and western resources issues, it’s really the Department of Interior. The Secretary of Interior was just confirmed a couple of weeks ago. … There are a whole host of positions and people that need to be nominated and put into place for the Trump Administration to really have a day to day impact over how the decision’s made on water supply and project operations,” Amaral said.