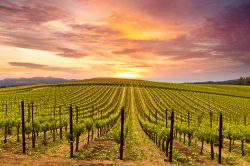 U.S. Farmers and Ranchers Focus on Ag Production in California

Brad Greenway, Chairman of the U.S. Farmers and Ranchers Alliance, and Allison Garriga, Vice President of Strategy & Operations, recently spoke to us about some of the conflict going on in California between those who support modern agriculture in California ag and those who don’t.

“It’s hard to find anywhere on the planet that’s more important than California relative to not only food production, but of course the folks that are advocating against modern agriculture, against the technologies that we use on a farm today … a lot of it’s a lack of understanding. And there is that core food movement that’s in the Los Angeles and San Francisco area,” Greenway said.

“There’s some very, very strong voices out there that are opposed to the production that’s happening in the San Joaquin Valley, and we just have to find a way to continue to talk to those folks,” Greenway said.

The U.S. Farmers and Ranchers Alliance is promoting films in hopes of counteracting these anti-agricultural movements.”

The film is narrated by Dr. Neil deGrasse Tyson, the American astrophysicist and science communicator. Tyson closes the film by saying: “The good thing about science is that it is true, whether you believe it or not.”

“We need to do more and more, getting that out to more and more consumers across the country and especially the West Coast. Part of it is that we have to also find a way to put money behind some of those issues in social media,” Garriga said. “When we do see something that maybe has a viral capability that may take off on Facebook or Twitter, we’ve got to be ready to put a little money behind it. That’s what we have to do.”

“That’s what the people are doing against us. That’s what we have to do to counter some of this activity,” Garriga explained.