Simba Temba Hove grew up on a farm in the rural area of Zimbabwe in Africa. “[Farming] is all we did in my childhood. My father had ten kids, and all we did in the morning was wake up, go to the fields, work the fields the whole day and into the evening, and then go home. Everyday we did this, every day except Sundays. So, farming is very close to me. That’s all we did. I was in the rural area of Africa, so we were all subsistence farmers.”

Hove is intimately aquainted with droughts, having lived through the devastating 1982 drought in his country: “When the drought hits, there is nothing that you can do. There is no water system, and everyone is on their own. The drought hits your livestock, your fields, your plantations, your wells, your rivers, everything is gone.” Soon after, Hove came to America, went to college and became a registered nurse in the Bay Area.

He spoke to several farmers including Joel and Todd Allen and Vaughn Von Allman of Firebaugh in western Fresno County.  Also prominent in the film is Gayle Holman, public affairs representative for Westlands Water District in Fresno.

Hove used these interviews to let African farmers compare their experiences: “I wanted to do a documentary like this one so I could show African farmers. When I first talked to Joel, my idea was to show this to African farmers so they could see what an American farmer’s life is like through the drought, and how he survives.”

Check back here to find a screening near you. To see a trailer of the film go to You Tube: https://www.youtube.com/watch?v=LOk3PyOWT5M 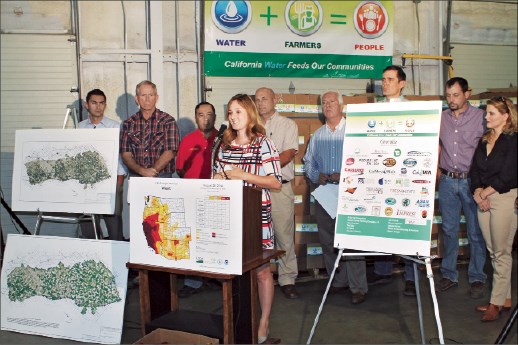 Fresno County farmer Bill Diedrich said the impact of fallowing hundreds of thousands of acres of irrigated cropland in the San Joaquin Valley this year translates into significant economic losses for the valley’s small farming communities.

“It’s the people—and the communities that depend on agricultural production—that are getting hurt,” Diedrich said at a news conference in Fresno to announce the donations. “For example, the schools are being hurt. If people are moving on, there’s no reimbursement for (school) attendance and the children of those families who’ve stayed are losing out. Besides the school districts, cities and counties also are being affected and their ability to help in this crisis is reduced.”

Diedrich said that when he drives through the valley’s small towns, he sees workers standing around idle, “because there’s so much fallowed ground there isn’t the normal demand for labor. We’re looking at a disaster and we’re hoping for regulatory relief,” noting that Congress will be considering drought-relief bills in coming weeks.

Kym Dildine with Fresno-based Community Food Bank said one in four people in Fresno, Kings, Madera, Kern and Tulare counties copes with food insecurity, a situation made worse by the ongoing drought.

“Every food bank we’ve spoken to is really grateful to be receiving an entire truckload of fresh produce grown right here in the valley,” she said. “Because less fruit is available, they’re having a harder time accessing it.”

“The food we grow here extends far and wide,” said Gayle Holman of the Westlands Water District. “In fact, most people don’t even realize the food they may be eating in other parts of the state, or across the United States, actually originates here.”

The Fresno County Farm Bureau, along with many valley farms and businesses, supported the food donation effort, as did irrigation districts and service groups such as the Girl Scouts of Central California-South and the Fresno Area Hispanic Chamber of Commerce, as well as California State University, Fresno.

Participants said the coalition hopes not only to bring attention to the impact of the drought and how far-reaching it is, but also to set the stage for future food donation drives as the crisis deepens during the winter. Diedrich said the effort also brings attention to the fact that an unreliable water supply jeopardizes everyone’s food security.

“The drought has impacted California’s food banks because they can no longer adapt to the spike in food prices resulting from a lack of water for farmers,” said Cannon Michael, president of Los Banos-based Bowles Farming Co. “This campaign has been launched to feed the needy and raise awareness about how the drought hurts the most vulnerable people in the state.”

“We hope raising awareness about the drought will bring all stakeholders together to find short- and long-term solutions,” he said.

“This was just one small aspect of how we’re trying to help,” she said.

When the U.S. Bureau of Reclamation announced a zero water allocation for farm customers south of the Sacramento-San Joaquin Delta, Mendota Mayor Robert Silva said his community knew it was facing “a terrible situation.” But he said the city learned from the drought in 2009 and immediately began preparing.

“We got service agencies and utilities to come in and set up assistance programs right away,” Silva said. “We’ve added recreational opportunities for our youth to keep them busy and we’ve been finding ways to support our schools.”

In 2009, Silva said water shortages led to severe social problems such as domestic violence and higher school dropout rates that might have been eased with adequate social services. The unemployment rate in Mendota today is in the range of 35 percent, he said, compared to 50 percent at the same time in 2009.

“Unemployment is still high, but not as bad as we feared,” Silva said. “But we’re not out of danger yet. I understand it’s going to be a short growing season this year, harvest is nearly over, and that means more people will be unemployed for a longer time. We haven’t seen the worst yet.”

He said Mendota residents have been planning ahead and “trying to get the resources they’ll need to get by until they can go back to work next year,” and more agencies are prepared to help.

“But it’s going to be a long winter,” Silva said.