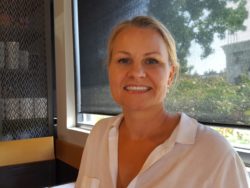 Entrepreneurship Forum in Clovis on Nov. 15

“We are gearing up for our big event that will be held at Clovis at the Veterans Memorial District in the auditorium,” said Helle Peterson, manager of the Center of Irrigation Technology at California State University Fresno.

“We actually have the whole building because we have multiple things going on. We will have a series of workshops during the day that’s all around financing, investment, entrepreneurship, innovation. We also have five companies that will pitch their technology or their business to a group of potential investors. The whole community will be there, and we’re very excited about that,” Peterson said.

“There’s an evening program attached to that, which we call the stock exchange. It’s where we will have 20 entrepreneurs exhibiting their technology business and then the audience will go around and invest in these businesses with monopoly money. It will create excitement of which company we think will be more successful,” Peterson said.

The keynote speaker will be Paul Singh, the founder of disruption Corporation.

“He’s actually one of the founders of 500 Startup, which is a really well-known accelerator in the Bay area, and he can really talk to that entrepreneurship innovation space,” Peterson said.

Find out more about the event and register for it here. 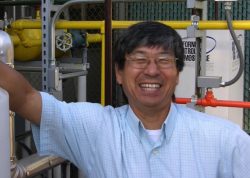 Mizuno explained, “As the salt level rises, and if the soil salts aren’t leached out periodically, the ground becomes unsuitable for cultivating several crops. Growers either shift to high salt-tolerant crops or essentially idle that land.”

Central Valley salinity conditions are serious, according to Mizuno. “Growers have already taken a lot of land out of production on the Westside,” he said, “and they’ll continue to do that until the salt mitigation measures have been implemented. Essentially, we need to get back to where we can currently sustain the amount of farming we have with the type of water that we have.”

“We are looking at desalination of agricultural drainage water,” Mizuno stated. “We’re trying to reclaim water that’s suitable for even human consumption; but right now, we’re looking at reclaiming water that is suitable for Ag use through a desalination process called vapor compression distillation, which takes drainage water from the Ag fields, distills it to make it pure and recovers some of the salts on the backside.”

Mizuno explained salt recovery would enhance the economic viability of this project by eliminating the cost of trucking or disposing the resulting brine and by possibly converting it into a revenue stream. “We’re trying concentrate that brine to a point, using solar evaporation, where we can find other uses for the highly concentrated form or maybe even sell it to a chemical processing company. We are also focusing on minimizing the energy cost to distill the water, to make the process more efficient.”

“We’re trying to combine multiple technologies, using ion exchange as our front end process,” Mizuno explained, “to get rid of some of the hardness in the water. We get rid of calcium and magnesium in the water, which helps the distillation process and protects the equipment for a longer period of time before requiring cleaning or eventual replacement. We’re using the brine stream of the distillation process to actually regenerate, upfront, the ion exchange units—similar to a home water softener.”

Mizuno explained, “When you look at the reasons why desal isn’t used more often—just the cost of energy makes the cost of the water expensive. So, we do a lot of energy recovery. Just take the basic process of distillation in which you heat up the water solution, boil it off, and condense the residue. A lot of that water you use, or a lot of the energy used to boil off the water, is lost; so we recover the heat from that steam to save energy. In other words, we don’t discard that energy; we try to reuse it.”

“We have been conducting studies on some Westside ranches,” he continued, “with our pilot plant that processes only one thousand gallons per hour. A series of ditches on those ranches collect the drainage water to be purified. Now, we have moved everything back to the Fresno State Center for Irrigation Technology (CIT),” said Mizuno, “because we’re building a brand new redesigned unit, which should be operating by the end of this year.

“The second phase of the project,” Mizuno commented, “is to move the unit out to Panoche, and conduct field testing out there. We will evaluate the energy efficacy and also the economics of the unit and process, and we will field-test to determine how rugged and dependable it is out in the actual service area.”

“This is actually a research project,” Mizuno clarified. “We’re still fairly far away from commercializing it. Basically, we will evaluate the scalability of these units so that depending on the size of the farm and everything else, you can either put multiple units out there or design a single-unit system very similar to ours. You could size the system to meet whatever the demands are, but you need a reservoir or holding area, and you’d like to be able to operate 24/7.”

“We are considering using solar to power this,” Mizuno mentioned. “The issue with solar is, obviously, it tends to work during the daylight hours but doesn’t do much during the evening hours. We’re looking at using batteries, electricity, natural gas or some other energy source to keep the process running when the sun goes down, but it’s a matter of economics.”

c about the process itself, but he does not anticipate it will be a cure-all. “It is a research project,” Mizuno reiterated, “and we’re trying to see if we can drop the energy cost, and lower the water cost. I think the economics will change though. Water will cost more for everybody in the next few years. As that changes, I think some of these technologies are going to become feasible from an economic standpoint.”

The entire state shoud be aware of these water issues, according to Mizuno. “I think there are still a lot of issues that the common person isn’t aware of and how they fit in, and Ag is no exception. I would like people to understand that we are working to stretch the available amount of water supplies we have and we are working on technologies that are yet unproven. But some of these technologies will require a few more years—to many years to solve. Others are not economically feasible today, but they may be in the future as water supplies get tighter.”

Mizuno has observed that farmers are already doing a lot to conserve water, particularly employing the use of new technologies such as drones to evaluate water stress and nutrient stress in plants. “Right now,” he offered, “we are looking at another piece of the puzzle; we’re trying to stretch the amount of water supply we have, utilize it in multiple-use scenarios, and use it more intelligently to make some waste streams into revenue streams.”

Mizuno urges the general population to just be aware. “Conservation is the first step for a lot of people,” he said. “That’s the easiest way to stretch water supplies, and so I think people need to understand that water is a finite resource in the state of California. The water situation is not likely to get better anytime soon, even if we have normal rainfall and so forth. We are in an overdraft situation with our water supply.”

CV-SALTS participants collaborate to develop a workable, comprehensive plan to address salinity, including nitrates, throughout the region in a comprehensive, consistent, and sustainable manner.