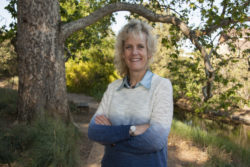 California Ag Today recently spoke with Alison Van Eenennaam, a UCANR Cooperative Extension Specialist focused on  Animal Genomics at UC Davis. She discussed the argument against GMOs and the difficulty that some science communicators have with reaching anti-GMO consumers whose arguments are more emotion-based than fact-based.

“When every major scientific society in the world says something, then I don’t believe it’s a giant conspiracy theory,” Van Eenennaam said. “I believe that’s what the data show, and I get a little bit frustrated when people cherry pick an outlining study and just selectively ignore the consensus opinion of every single scientist in the world. That doesn’t make sense.”

“It becomes more like a denialist instead of a skeptic at that stage. Then discussion around the safety of GMOs is just out of kilt with the actual scientific data. It’s frustrating trying to correct that with science because it’s very hard to counter an emotional argument. So we need to peel back the story in a narrative form,” she said.

“I think that’s what’s been encouraging to me, just with general audience populations watching it, is they’ll come up afterwards and say, ‘You know what? This film made me think.’ ” Van Eenennaam said. “As a science communicator, I cannot ask for more than that. That’s exactly what I want people to do. I want them to dig down into the data and recognizing where they are getting the information and what it’s saying. I think that is a positive outcome.”

And certainly the movie has changed the mind of some people.

“And that is great, but we are wanting people to reevaluate on why they are changing their minds and are they willing to change their minds based on the evidence?  That is one of the focal points of the movie,” Van Eenennaam explained.

The Food Evolution movie can be seen free if you subscribe to Hulu. It can also be seen in different areas on the web. Simply search for it online.