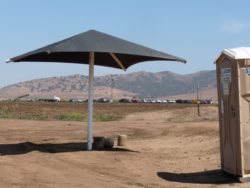 On April 12, a coalition of agricultural organizations will hold two Heat Illness Prevention Sessions in Easton.

Manuel Cunha, Jr., President of Nisei Farmers League, said, “We appreciate the staff and the efforts of the Department of Industrial Relations, Cal/OSHA Consultation with their presentation of the safety message: WATER, REST, SHADE.”

Cunha continued, “the efforts by all our agricultural partners, as well as Cal/OSHA is to educate employers and supervisors about the dangers of working in the heat. We have held many educational sessions, sent out publications, had media events and continue to have ongoing outreach efforts throughout the state. Education is the key to reducing the number of heat illnesses that we see in our fields.”

Attend one of the sessions on April 12 for the latest documents outlining high heat procedures, including additional steps to be taken to ensure our employees’ safety.

There is no cost for attending these training sessions.

Diane Laub and Jared Allred, Fresno County mother and son grape growers, shared their passion for grape growing and some insight on their raisin and winegrape operations. “We have mostly Thompson Seedless,” Allred began, “which has been made into raisins for the last couple of years. Sometimes we send them to the winery if the price is right. We also have about 75 acres of overhead trellis dried-on-the-vine (DOV) Fiesta grapes that we use for raisins every year.”

With the harvest season behind them, Allred summarized, “in the first week of August, we went through and cut all the canes on the DOV grapes. The raisins started drying on the vine for a few weeks, and then we sent a mechanical harvester through.”

The mother and son team also farm 85 acres of French Colombard. “We used to have 40 acres of Syrah,” Allred added, “but we took [the variety] out this last year because the price hasn’t been good and the vineyard was not in very good shape.”

“In years past, we used to send all of our Thompson’s Seedless to the wineries,” Allred explained, “but the price hasn’t been good the past three years, so we’ve been making it into raisins. This year, the only thing we have going to the winery is our French Colombard.”

Allred also commented, “The crop this year looks pretty good, actually as good—if not better than—last year. ‘Not a lot of powdery mildew except on the Fiestas, which are always prone to a little bit of mildew.”

Diane Laub, Allred’s mother, explained her role on the family’s farm. “I mainly oversee everything on the farm and also do all the office work. That is what I was brought up doing. I still do all my own work: irrigate, parts runner—you name it.”

Laub is the daughter of the late Don Laub, a well-known and respected leader in agriculture and in the Easton community where he farmed. For 50 years, Don Laub was active with the Fresno County Farm Bureau and served as president from 1986-1988. In 1996, he received the Distinguished Service Award from the Sacramento-based California Farm Bureau Federation. He also served on boards of many other agriculture organizations, including Ag One Foundation at Fresno State and California Association of Winegrape Growers.

Following in her father’s footsteps, Diane Laub explained her passion for the business, “It’s just something that I love to do. I don’t know what I’d do without it. You know, it’s my job; it’s my life,” she said.