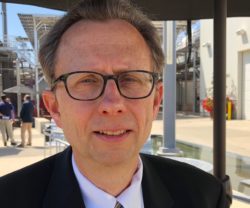 The food packaging business is massive in California. California Ag Today spoke recently with Rob Neenan, president and CEO of the California League of Food Producers, based out of Sacramento, about California food processing.

“The League of Food Producers is a statewide trade association. Our primary function is regulatory and legislative affairs on behalf of our members,” Neenan said.

The association represents about 50 food processor members across the state, most of the Central San Joaquin Valley, but it serves seven or eight members in southern California. “We have Del Monte in Modesto. We have Hilmar Cheese in Hillmar. In Lodi and Woodland, we have Pacific Coast Producers. We also have also some nut processors, dried fruit processors, so the whole gamut,” Neenan said.

“There aren’t as many frozen fruit and vegetable companies as there used to be, but we have a few, for example, Del Mar Food Products in Watsonville and a couple of companies in the Merced area,” Neenan noted.

The processing industry represents a big part of the power of California agriculture.

“The annual output of the food processing industry in California is about $200 billion. About $25 billion is in direct value added on top of the ingredients,” he said.

It’s the third largest industry in the state regarding the manufacturing sector—only high tech and oil refining are larger in California.

And Neenan explained that there are some significant issues that canners are facing.

“The biggest is the proposed steel and aluminum tariff situation. The canning industry needs tinplate steel, which is also used in cans and aluminum foil, which is inside of some packaging as well. For the canneries left in California, this is going to increase their cost of doing business greatly,” Neenan said.