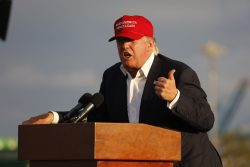 The election of Donald J. Trump as the 45th President of the United States may prove very significant for California. He and his future administration may be able to make sense of the devastating water deliveries diverted from California farms to protect fish species that may already have become extinct, in order to comply with the Endangered Species Act.

Joel Nelsen, president, California Citrus Mutual and a leader in California agriculture, is encouraged by the election results. “You know, the Donald Trump election was a bit of a surprise to me. You can always hope, but the numbers did not look that good. Now that he is our president-elect, I think we can be somewhat optimistic about the next Congress and this next administration,” Nelsen said.

Nelsen said the optimism is going to be on several fronts. “One, I think we have an opportunity now to move water legislation that contains real storage and creates water for a bigger population in California,” he said.

“We also have an opportunity to slow down a rogue agency—which I would call Environmental Protection Agency (EPA)—and their activity specific to crop protection tools. We can get an effort going to modernize the Endangered Species Act. Nobody wants to eliminate species, but let’s face it, when that was first signed and passed, it was two generations ago. I think we need to take another look at that,” he said.

Nelsen noted there are some opportunities on the horizon. He hopes the upcoming Congress and new presidential administration will generate some positive activity for the California agriculture industry .

Nelsen and other California ag leaders will soon return to Washington to make sure things are getting done. “A couple of us are going back next week for the lame-duck session because we are hoping Congress will pass a budget that will fund the Asian Citrus Psyllid and Huanlongbing program,” he said. “There is no money for it in the USDA budget. As a result, the support at the federal level is less than what it could be or should be.”

“Because the current administration is going to be in office until January 19, 2017, the activists have until then to get things moving in a direction that cannot be stopped from their perspective. I don’t think these next two months will necessarily be quiet.”

“We must have a mindset that others will attempt to do what they think cannot be done. It will be up to many of us in leadership positions to ensure that there’s still a balanced approach with this administration before the next one comes in,” Nelsen said.