“Ants are amazing because they're way more diverse than most people realize,” says UC Davis entomology doctoral candidate Jill Oberski. “Some are huge, some are tiny, some are blue or green, and a lot of them have crazy spines. There are ants that run farms with crops and livestock, and ants that can build bridges and survive floods, and ants that live in the highest treetops and never touch the ground.”

That's just some of the information showcased at the UC Davis Biodiversity Museum Month program on Saturday, Feb. 13 when three doctoral students in the Phil Ward lab, UC Davis Department of Entomology and Nematology, took the helm.  Oberski, a fourth-year doctoral student, and Ziv Lieberman, a first-year doctoral student, spoke about the diversity of ants and field questions, followed by doctoral candidate Zach Griebenow's presentation on his research.

Then on Saturday, Feb. 20, from 11 a.m. to noon, Professor Phil Ward will host "All About Ants," billed as a "fun and lively question and answer session." The programs are free and family-friendly. See http://biodiversitymuseumday.ucdavis.edu/live-programs.html for the Zoom links.

Zach Griebenow
Griebenow grew up in rural Kentucky and received his bachelor's degree in entomology in 2017 from The Ohio State University, undertaking undergraduate research with distinction on species boundaries in the Puerto Rican fauna of the subterranean termite Heterotermes.

"As so everyone in the Ward lab, I study how different groups of ants are related to one another, and why they look and behave the way that they do," he said. "Specifically I study an obscure group called the Leptanillinae, which have no common name. As ants go, they are strange, and we know very little about them. So far, I have confidently teased out the major evolutionary relationships among leptanilline ants, but there is a lot more work to be done, particularly in comprehending the often bizarre structural modifications seen in the male Leptanillinae (legs that look like toothbrushes, etc.)."

Ziv Lieberman
Lieberman, born and raised in California, studied at the College of Marin before transferring to UC Davis to major in evolution, ecology and biodiversity, with a minor in insect evolution and ecology. "Prior to UC Davis, I spent several years working abroad for the California Academy of Science documenting historical ant specimens," Lieberman said. "At the end of my undergrad, I published my first paper, a revision of the poorly-understood (and very cute) African species of the ant genus Discothyrea."

In the Ward lab, Lieberman studies "ant evolution, specifically focusing on connecting evolutionary relationships (the ant 'family tree') with anatomy, using a combination of next-generation imaging techniques and large-scale genetic analyses. In particular, I am interested in describing and comparing internal anatomical features which are usually ignored, and understanding how these traits contribute to biodiversity."

Jill Oberski
Oberski grew up in Minnesota. "I was fascinated by insects from a very young age," she said. "I attended Macalester College, spent a few confused years on a pre-med track, and ultimately discovered a career in entomology was feasible and worth pursuing. This has led me to Phil Ward's ant systematics lab at UC Davis, where I'm now a PhD candidate." 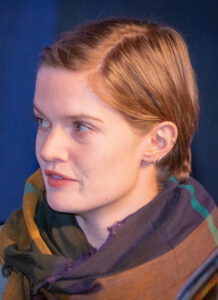 "My research centers on the ant genus Dorymyrmex, which is commonly found all over the Americas," Oberski said. "Even though they're extremely common (Davis itself is home to two species!), we have no idea how many species there really are. In addition to discovering and naming these species, I'm really interested in biogeography and ancient history: Where did Dorymyrmex originate? How are the North American species related to the South American species? And how did they disperse before the isthmus of Panama was connected?"

Professor Phil Ward
Professor Ward teaches California insect diversity, insect taxonomy and field ecology, and introductory biology (the tree of life). His research interests include systematics, biogeography and evolution of ants; ant-plant mutualisms; phylogeny and speciation. He holds a bachelor of science degree in biology from Queens University, Canada (1973) and a doctorate in zoology from the University of Sydney, Australia (1979).

Due to the COVID-19 pandemic, the 10th annual UC Davis Biodiversity Museum program is all virtual this year via webinars and pre-recorded presentations and takes place throughout the month of February. The science-based event traditionally occurs on only one day--the Saturday of Presidents' Weekend, when families and friends gather on campus to learn first-hand about the UC Davis museums and collections.

This year's biodiversity event is showcasing 12 museums or collections:

To help support the Biodiversity Museum event, contributions are being accepted through a month-long crowdfunding campaign program at https://crowdfund.ucdavis.edu/project/24310.