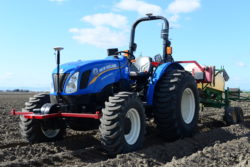 27
SHARES
ShareTweetSend to a friend

A New Generation of Women-Focused on AgTech

It would be overly simplistic to state that this is a tough time for growers in the U.S. The number of farms and ranches continues to decline, with a growing number of farms being sold off as farmers are faced with the rising costs of doing business, weather and climate fluctuations, limited land, and water supply and the reality that future generations of youth are turning away from agriculture as livelihood.

There are some 2 million farms and ranches down 3.2 percent from 2012, according to the 2017 Census of Agriculture. Many farms, especially large ones that have depended on thousands upon thousands of farmworkers, struggle to find field workers to plant and harvest the crops especially against a backdrop of uncertain immigration policies. Add to that data that points to a world population of 10 billion by 2050.

Growers are under tremendous pressure to produce and maintain their own livelihood. A friend, who is a grower, made an additionally thoughtful point. Most consumers are not willing to pay over a certain amount for food. A carton of strawberries, for instance, maxes out at $10 and a carton of eggs at a similar price range. Climate change and weather fluctuations add tremendous stress to what has always been a stressful career.

This is why innovation and technology are both considered a silver lining when it comes to agriculture in the 21st century. The burgeoning agtech sector, once a niche and somewhat looked upon cynically by growers, is increasingly accepted by growers at mid-sized to larger farms and in both the east and west coasts.

AgFunder reported that 2018 was a “record-breaking year” for the agtech industry with $16.9 billion in funding spread across 1,450 investments, many of them bigger deals than previous years. AgTech startups tackled a wide range of areas including vineyard and pest management to AI and blockchain software that addresses food traceability and soil testing kits based on genomic sequencing technology.

Other innovations include autonomous self-driving tractors, robots that can pick fruit and vegetables. The innovations are designed to make farming more productive and efficient.

Every year the headlines containing agtech seem to expand. The Forbes AgTech Summit held in Salinas since 2015 has seen the number of attendees steadily rise. And as an example, some of the biggest players in leafy greens including Taylor Farms, Tanimura & Antle and Driscoll’s are embracing agtech.

Taylor Farms, for example, teamed up with agtech accelerator Plug and Play that connects the company with new innovations. The cherry on top is that a growing number of women who are innovators and entrepreneurs in this space. These women are launching or co-launching agtech tech startups, or in decision making positions. Since 2016 I have been focused on telling the stories of women entrepreneurs in agtech, and have found they share numerous common threads. The majority are young, in their 20s and 30s, and come from a STEM background. Most are fueled with a passion for using their knowledge in science and technology to solve some of the growers’ problems.

And every week there are more female innovators as part of the mix. AgFunder reported earlier this month that Inari, an Indianapolis-based agtech company that focuses on expanding seed diversity, raised $89 million. Inari’s CEO is a woman Ponsi Trivisvavet.

The St. Louis Business Journal announced that Qiaoni Linda Jing was named CEO of Missouri-based agtech company Genective. Jing came to Genective from Bayer Crop Science where she was senior director of global corporate affairs, and previous to that was a director at Monsanto. Ellie Symes, the CEO, and founder of The Bee Corp is in her 20s, has achieved early success by creating a bee-monitoring app including inventory tracking. The Bee Corp was one of the 10 companies chosen as part of this year’s THRIVE cohort, a competitive accelerator program for agtech.

This reality is also part of the silver lining. Traditionally agriculture has been male-dominated sector as has the technology. Nearly 96 percent of producers in the U.S. are men with an average age at 57.5. Moreover, the average age of farmers continues to inch upwards.

When it comes to technology the story has been almost parallel when it comes to the dearth of women leaders especially in venture capital. Just 2.5 percent of all venture-capital-backed startups have an all-female founding team. Only 9 percent of the venture capitalists investing in tech startups are women, according to a recent study by Ian Hathaway a leader researcher at the Center for American Entrepreneurship. Could this change with the continued rise of the agtech sector, and the increased challenges that growers face?

The Chinese word for “crisis” consists of the two characters “danger” and “opportunity.” This sums up the importance of not only bridging innovation and farming but accepting that moving forward they are inseparable in agriculture.

Amy Wu is the CEO and founder of From “Farms to Incubators: Telling the stories of women entrepreneurs in agtech,” which uses multimedia to highlight women leaders and innovators in agtech.

Amy Wu is the CEO and founder of From “Farms to Incubators: Telling the stories of women entrepreneurs in agtech,” which uses multimedia to highlight women leaders and innovators in agtech. Amy is a resident of the Western Growers Center for Innovation and Technology in Salinas and continues on its mission of expanding the profiles of women in food, farming, and technology.