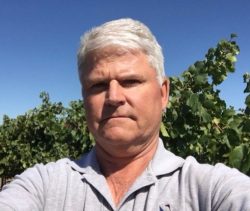 Mechanization is Future for Winegrapes

Presently, Wilson's winegrapes are past veraison, a stage of ripening in the physical grape maturation cycle in which the berry starts to soften and take on sweetness and color. Veraison is an excellent phase for the winegrapes to be in at this point in the season.

Wilson elaborated, “Pinot Noir and Pinot Gris are probably the furthest ahead, then Pinot Noir at 50 to 60%, and finally, Chardonnay around 30%. We're getting good color and size now.”

Despite hot weather this year, Wilson says, "it hasn't been too bad.” Most of his grapes are already contracted, and he anticipates a good vintage. "There are a couple of tons here and there, but [the winegrapes] have been pretty much sold out since early spring," Wilson commented.

Wilson warned the higher cost of labor due to the recent minimum wage increase in California from $10 per hour currently to $15 in 2020. “We get pretty good winegrape prices. I'm not speaking for the district. I don't know how some of these guys are going to survive,” he explained.

“We're going to be forced into mechanization, and the wineries are just going to have to accept it. I think they are going to accept it, if they don't want to pay [labor increases] anymore,” Wilson said.

Nevertheless, Wilson is more fortunate than some other growers because his vineyard is completely mechanized. “We're 100 percent machine—other than a couple of special jobs where the winery who wants the grapes will pay for workers for hand harvest.

In comparison to Wilson Vineyards, vineyards in the Napa and Sonoma regions will experience significant wage increases because their winegrapes are hand-harvested. “The only hand harvesting we do amounts to less than one percent,” Wilson said.

Though Wilson evaluated this year's crop as better than last year, "I think, overall, it is probably not much better than an average harvest, and yields may even be a little lighter than the average. I would say overall about 7.5 tons of winegrapes,” Wilson noted.