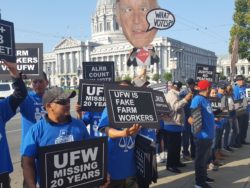 Jesse Rojas, spokesperson for Pick Justice, a farm worker rights group (not a union) organized a rally of farm workers last week at the California Supreme Court building in San Francisco to bring attention to the court hearing on the UFW’s effort to force unionization on farm workers at Gerawan Farming, Inc.—despite having abandoned the workers for nearly 20 years. Over 150 Gerawan workers traveled from the Central Valley to protest the UFW/ALRB team that is pushing for forced unionization of these farm workers via the justice system through Mandatory Mediation and Conciliation (MMC).

Gerawan workers, dressed in blue Pick Justice t-shirts and armed with company ID cards and pay stubs to demonstrate authenticity, chanted at the UFW protesters who wore red UFW t-shirts. Rojas said the UFW individuals were apparently not Gerawan farm workers and were paid to be there. “All attending [in our group] are employees of Gerawan Farming,” he stated.

“I wish all 3,000 Gerawan workers could have come today like they've done in the past,” Rojas said. “But they actually have to work because they are real workers and they don't get paid to come here. They miss days of work. A lot of them are going to get written up. They are going to get into trouble. They have had to find babysitters to take care of their kids; they are real workers.”

Rojas explained the focus of the demonstration is the need for these employees to choose their own future. “At this point, what is really important for them—not just them, but for all farm workers in the state—is simply to have the freedom to choose—freedom to vote.”

“But they are not getting those rights. Why not them? It is their right to vote and have their votes counted,” Rojas said.

If the Court imposes mandatory mediation, Rojas said the outcome “would affect about every farm worker in the state, almost 800,000 of them. The rights of the workers would be taken away."

“The way mandatory mediation and conciliation works is the ALRB, the state government, has the right to write and impose a contract on employees without their approval,” Rojas explained. “In the Gerawan case, they will not have the right to strike or protest like they are doing today."

“On top of that, this so-called contract will actually lower their take-home pay,” said Rojas, because mandatory UFW union dues totaling three percent of their paychecks would be imposed on the workers. If any of them refuse to pay the union as a condition of employment, they will be fired.

The justices of the California Supreme Court have until December 5th to make a ruling.

PickJustice.com celebrates freedom of choice for farm workers. As posted on their website:

We are concerned citizens who support the rights of workers to choose whether or not they want to have a union represent them. We are standing up for workers who are victimized by a politicized government agency.

Freedom of choice is a human right. People who are not educated are deprived of their freedom by those who are educated.

PickJustice.com exists to educate the public about the corrupt relationship between a once-noble union and the dishonest attorneys at the California Agricultural Labor Relations Board (ALRB). We want to help social change to show that, once a union has violated the trust of those it purports to represent, that union no longer votes for the workers.

A generation ago, many farm workers were afraid of their employers. That isn’t the case anymore.

Thanks to organization against social injustice and a greater consciousness of producers and consumers alike, the plight of thousands of farm workers in America is over.

In César’s words more than three decades ago: “The very fact of our existence forces an entire industry – unionized and non-unionized – to spend millions of dollars year after year on improved wages, on improved working conditions, on benefits for workers.”