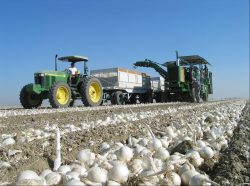 The California Garlic and Onion Research Committee was established in 2005 as a state marketing order under the supervision of the California Department of Food and Agriculture.  Bob Ehn is the CEO & Technical Manager for the committee.  The organization’s main goal is to organize onion and garlic growers to develop white rot management programs.  "Once we find a white rot field, we mark it. We then prepare a white rot list that we hand out every fall to our processors or handlers for them to be able to know not to go back into a field," Ehn said.

Once infected with white rot pathogens, leaves of the plant will begin to show yellowing and wilting.  Leaf decay will also occur starting at the base, with older leaves collapsing first.  Plants can become infected with white rot at any stage of growth, but symptoms typically appear from mid-season to harvest.  "It has a window of where it's viable. It's stimulated by organosulfur oxidate or odor that comes off the roots. ... That sends out a message like ringing a dinner bell," Ehn said.

One of the reasons white rot pathogens are so dangerous to California growers is because of their longevity in the soil.  "If you had a field that had light damage, you go back into that field another time and that 10 percent is probably going to turn into 50 percent because of the ability to reproduce,” Ehn explained. “They are hardy little critters. They're still viable [in] we know, we've documented, 20 years. And anecdotally, we have information that it's been there 30 years.”

California is the leading producer of garlic and onions in the country, growing more than 90 percent of the commercial garlic in the U.S.  Ehn described how white rot destroys the bulb from the inside out.  "The sclerotia virtually wake up and send out a germination tube looking for that source of the organosulfur compounds, find it, enter the roots, and then can enter the base plate of the garlic. Once it's inside the base plate, it will reproduce.”

Each year, garlic and onions contribute between $150 to $300 million to the overall farm gate value.  If white rot is found in a field, there is still a chance that the land can remain viable.  "If we could GPS a corner or a piece of ground where the white rot was, and it wasn't in the rest of the field, we will then map that. By mapping that, we ultimately could come back and treat only that area, thereby not having to do the cost of treating the entire field," Ehn said.