During its monthly meeting yesterday, Westlands Water District Board of Directors unanimously approved making water available to the City of Huron, as the City struggles with a desperate situation of diminishing water resources in the face of the drought. 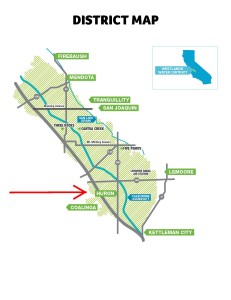 As the State of California experiences unprecedented water supply conditions, not only is the agricultural industry suffering, many rural communities are struggling to meet basic water needs. The City of Huron, in Fresno County, has experienced the same perilous situation, for its approximately 6,900 residents and additional temporary farm workers. With unemployment hovering just above 35%, Huron recently approached Westlands about acquiring water to enable it to meet the City's water needs.

Westlands Water District Board President Don Peracchi stated, "We are very pleased to be able to assist one of our local, rural communities during this difficult situation. Every day we hear of another family or community succumbing to a dry well. Unfortunately, situations like these are becoming all too commonplace."

The City of Huron welcomed the recent news ensuring they would receive water from the District. Mayor Sylvia Chavez said, "Our community continues to suffer with the effects of the drought. We take for granted that water will remain plentiful, but the drought has depleted our reserves. We are thankful that Westlands was willing to work with us during this difficult situation."

Earlier this year, the United States Bureau of Reclamation (USBR) initially denied the City of Huron's request for assistance; at which point, the City turned to Westlands as an additional source. The issue was brought before Westlands' board members who agreed to help the City look for viable solutions.

The drought has caused irreparable harm not only to agriculture but also to families, businesses and communities with effects that are far-reaching beyond this year. This decision will provide limited relief to a much greater problem.

Westlands Water District, the largest agricultural water district in the United States, is made up of more than 1,000 square miles of prime farmland in western Fresno and Kings Counties. Westlands currently has a contract with USBR for its annual supply of water to properly irrigate the district, yet USBR determines the allocation percentage it will supply. For example, USBR’s allocation percentage to Westlands for 2013 was 20% and for 2014 was 0%.