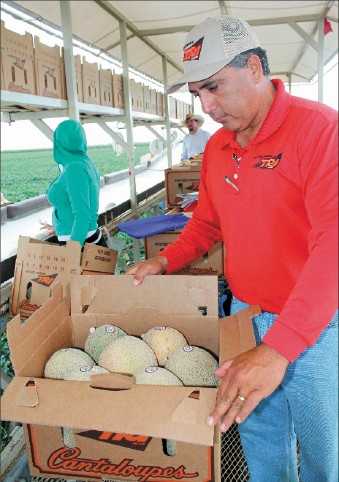 With severe shortages of surface water affecting key Central Valley production regions, melon growers say both water supply and quality will affect their final crop yields this year. As they ship cantaloupes, watermelons and other melons to supermarkets around the country, every grower in the Central Valley is talking about the water shortage.

There have been some acreage reductions because of lack of surface water, particularly on the west side of the San Joaquin Valley, but most melon growers have wells on their farms to irrigate their fields. Because of the salinity of much of that groundwater, however, melon growers report lower yields in many fields.

In addition, growers said they have found it necessary to sink their wells deeper as underground aquifers decline, and farmers report that some wells have run dry.

The annual melon harvest begins in the Imperial Valley and the neighboring Yuma Valley in Arizona in early to mid-May, then progresses north through the San Joaquin Valley.

Melon yields in Imperial and Yuma were lower than normal this year, growers said, because many of the fields were hit with mosaic viruses.

"We fought mosaic in the melons this year that was aggravated by the strong winds that came in later than normal throughout April and much of May," Imperial County farmer Joe Colace Jr. said. "The size early on was about a half to full size smaller than what we are accustomed to getting from our early crop, but after about the second week, our sizes improved and we were fine for the balance of the season."

Due to the lack of water in the Bakersfield area, Colace said his farm decided not to plant melons there as it typically does, choosing instead to extend the season in the Imperial Valley, where water was more available.

Sal Alaniz, director of harvest and quality control for Westside Produce in Firebaugh, said they have about 2,500 acres of melons that will be harvested through October. Their plantings are down about 300 acres this year due to water shortages and quality, he said. The farm is using only groundwater this year and its quality has affected some fields.

"We're using groundwater that is lower in quality and higher in salts, and that affects the quantity," Alaniz said, adding that melon quality is good, but yields are expected to be only average.

Westside Produce started its melon harvest on June 27, about eight to 10 days earlier than normal due to warm spring weather, Alaniz said. Harvest crews will go through the fields several times, choosing the ripe melons and leaving the immature ones to be harvested later.

Alaniz said the farm uses drip irrigation, which allows for water to be applied when the plants need it while still providing the ability to move harvest equipment through the field. He noted that drip irrigation does bring extra expenses, "due to the labor and need for filters."

So far, Alaniz said he has had no problem filling harvest crews. About 80 percent of the workers return each year for the melon harvest, he said, while noting that labor could get tighter as other melon growers begin their harvests. Each machine moving through the field employs a crew of 21 plus a foreman.

"The new food safety and trace-back rules are working fine," Colace said. "Anytime there is something new or a new application, there is always that learning curve. We are through that learning curve, and we are very consistent and satisfied with all of the food safety requirements. The rules are specific to the cantaloupes, but if we have customers who request this on other melons, we are in a position to do that as well."

"We are very pleased that all handlers achieved certification last year," said Garrett Patricio, vice president of operations at Westside Produce and chairman of the California Cantaloupe Advisory Board marketing committee. He said this season's audits are currently ongoing and that any new handlers will be added to the certified list as soon as their audits are complete.

In 2013, California growers produced cantaloupes on about 36,000 acres. Farmers also grew 10,500 acres of honeydew melons and 10,000 acres of watermelons last year, along with smaller plantings of a variety of other melons.