Initial Walnut Irrigation Can be Delayed

Initial Walnut Irrigation Can be Delayed

First springtime walnut irrigation can be delayed, according to a UC Cooperative Extension team in Tehama County working on some fascinating research regarding irrigation practices. Allan Fulton is an Irrigation and Water Resource Advisor who covers Tehama, Colusa, Shasta and Glenn counties. “We actually just finished one of our irrigation experiment harvests this weekend. It was looking at early season water management decisions, basically deciding when to begin the irrigation season,” Fulton said.

Growers typically begin irrigating their walnuts sometime between late April and early May. In order to be as thorough as possible in their experiment, Fulton and his team have been pushing the limits beyond what most growers would ever consider. “We had some treatments that got no irrigation until almost the end of June,” Fulton explained.

Now in its third year, the research experiment is generating information that will provide a variety of benefits. “The whole motivation is to avoid possible injury to the trees from irrigating too much, too early, from lack of aeration and damage to the root system,” Fulton said. Delayed irrigation, while having no impact on yield or nut size, can also provide a bit of water savings. “We're trying to look for the sweet spot," with less intensive early season irrigation in favor of root health, tree health and disease prevention. 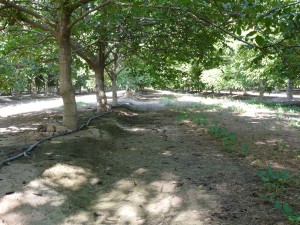 The research is being conducted in the northern Sacramento Valley primarily using the Chandler variety of walnut trees. Fulton has spent some time working in the San Joaquin Valley as well and understands different weather conditions can be a significant factor when applying their findings to other regions. “Our spring rainfall is quite a bit different than other walnut growing areas. Usually we've got an added source of water that sometimes you might not have in the southern San Joaquin Valley,” Fulton noted. From his experience, he suggested growers could usually wait until “the first week of May in most years, before really getting pressed for irrigation.”

The location of the research exposes groves to the opportunity to receive “more rain during the dormant season with a better chance at a deeper profile in moisture before you ever break dormancy,” Fulton said. More regional rainfall is possible in the spring as well, while the trees are growing.

The information gathered so far indicates growers should not jump the gun on springtime irrigation, particularly if there is still any kind of standing water issues. “The data is starting to suggest that you've got some room. You don't have to irrigate at the first sign of heat; you can use a little bit of the stored moisture coming out of winter,” Fulton said. He also noted “It's a lot more difficult to recover from a damaged tree with a sick roots system,” than it is to recover from a lack of early season irrigation.