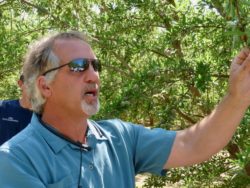 Adaskaveg explained how walnut blight is problematic due to the higher rainfall in the northern part of the state.

“We’ve been working on this for a number of years, and overall, the northern part of the state is always higher at risk because of the higher rainfall in Glenn County,” he said. “There is much higher risk for disease in Northern California, so a lot of the growers have planted later blooming varieties such as Chandler to avoid the blight infections."

"Rick Buchner [at UC Cooperative Extension] Tehama County and his group called that the prayer stage, which is when the female flower becomes exposed as it emerges from the bud. Those two timings would be for high disease pressure. If you had a history of the disease and you know that the disease is in your orchard, then we would suggest that timing,” Adaskaveg said.

“If you don’t have disease, and you still want to protect yourself, we say just spray at the pistillate flower emergence or the prayer stage. That sets a good way to initiate the spray program,” Adaskaveg explained.

Growers must keep in mind canopy expansion when applying materials.

“Walnuts are big trees, and as they go through bloom, all the leaves started emerging almost weekly. The tree canopy in that first three weeks of the season is doubling in size. By the time you get three or four weeks after that, the catkin flowering trees in full canopy will require a reapplication of materials,” Adaskaveg said.