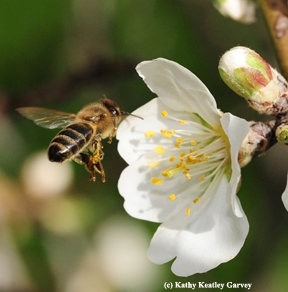 By Kathy Keatley Garvey; UC-Davis Department of Entomology and Nematology

Should the agricultural use of neonicotinoids be banned?

A team of entomology graduate students from the University of California, Davis, successfully argued at the Entomological Society of America's recent student debates that a ban on the insecticides in agriculture “will not improve pollinator health or restore populations, based on current science. Neonicotinoids are important for control of many significant agricultural and veterinary pests. Part of the solution is to develop better regulations that will protect the health of pollinators and retain the use of an important IPM tool.”

UC Davis won the debate, defeating Auburn University, Alabama, and then went on to win the overall ESA student debate championship for the second consecutive year.

“Neonicotinoids are important for control of many significant agricultural and veterinary pests,” team captain Mohammad-Amir Aghaee said at the onset. “Part of the solution is to develop better regulations that will protect the health of pollinators and retain the use of an important IPM (integrated pest management) tool.” The team also argued successfully that neonicotinoids (also known as neonics) are not all “created equal.”

The insecticide, chemically similar to nicotine, is implicated in the mass die-off of pollinators.  The European Union recently adopted a proposal to restrict the use of three pesticides belonging to the nenicotinoid family (clothianidin, imidacloprid and thiametoxam) for a period of two years.  In addition, the U.S. Fish and Wildlife Service announced that by January 2016, it will ban the use of seeds treated with neonicotinoid pesticides and the use of crops improved through biotechnology throughout the 150 million acres managed by the National Wildlife Refuge System.

ESA officials chose the debate topic and assigned UC Davis to debate the “con” side and Auburn University, the “pro” side. The Auburn team argued that neonicotinoids are causing the death of bees essential for pollinating our food crops, and that the use of neonicotinoids should end. The debates took place at ESA's 62nd annual meeting, held in Portland, Ore.

One of the several swaying arguments that led to UC Davis winning the debate was that not all neonics are created equal, and thus, they should not all be lumped together as "an equal" and all be banned.