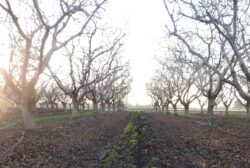 “Trees that go dormant generally are adapted to cold climates. Dormancy reduces the chance that the tender vegetative and flower buds will push into freezing winter temperatures,” explained Kallsen.  “Since we're well north of the equator, a lot of our nut and fruit trees that are successful here have this characteristic.”

“We can subdivide dormancy into endodormancy and ecodormancy. We're all familiar with the general temperature change that occurs as we go from autumn into winter. Temperatures are decreasing and at some point in winter, temperatures start increasing. And then when we get to spring, they increase rather rapidly, and bloom occurred in trees in Kern County,” he said. “In fact, it happens throughout the entire San Joaquin Valley.”

Endodormancy usually starts in October early November and continues into about the 1st of March and for leaf-out and bloom to occur, the plants endodormancy requirement for an adequate fall and winter cold period must first be met. And this is also known as chilling hours.

“So in pistachio for leaf-out and bloom to occur, the weather has to provide the trees with a certain amount of cold before the trees will come out of dormancy. Once we've got the trigger, the trees are triggered to bloom, we go into an ecodormancy period,” noted Kallsen

Kallsen said this usually happens at the end of February early March. “And then continues into the spring until we start getting temperatures warm enough for bloom. And this keeps going until early April,” he said.