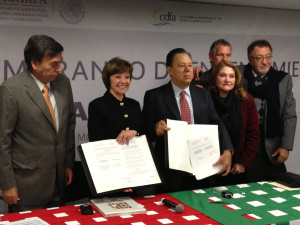 CDFA Secretary Karen Ross signed a cooperative trade agreement with officials from the Secretariat of Agriculture, Livestock, Rural Development, Fisheries and Food (SAGARPA) in Mexico City. This agreement is a follow-up to the Governor’s Trade Mission that occurred earlier this year.

“Mexico is a vital partner for California agriculture,” said Secretary Ross. “Further collaboration between our countries will enhance the opportunities within the agricultural sector for farmers and ranchers in both of our nations.”

The agreement follows months of dialogue between CDFA and SAGARPA that culminated in a meeting between Secretary Ross and Secretary Enrique Martinez at the Produce Marketing Association trade show in Anaheim at the end of October.