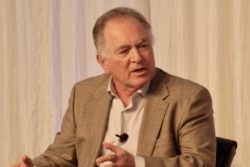 77
SHARES
ShareTweetSend to a friend

All Fruits and Vegetables Harvested by Foreign Hands

In his testimony, Nassif stated that experienced workers are aging out of the agricultural workforce, with few Americans lining up to take their place, despite wages well above state and federal minimums. Farmers in all sectors of U.S. agriculture, especially in the labor-intensive fruit and vegetable industries, are experiencing chronic labor shortages, which have been exacerbated by recent interior immigration enforcement and tighter border security policies.

As a result of the uncertain agricultural labor market, Nassif explained, many American farmers are either shifting toward more mechanized crops or moving their operations to other countries.

“The simple fact is this,” Nassif said, “fruits and vegetables that are eaten in the United States will be harvested by foreign hands.”

He continued: “The simple question for you, as members of Congress, is do you want those foreign hands harvesting your fruits and vegetables to be on farms here in the United States or do you want to see production continue to shift to farms in foreign countries?”

After touching on the existing, flawed H-2A agricultural guest worker program, rife with burdensome regulatory red tape, Nassif outlined a two-pronged proposal for agricultural immigration reform that jointly provides a pathway to legalization for existing farmworkers and their immediate families and creates a more flexible, efficient and market-based agricultural worker visa program to ensure a sufficient future flow of labor.

Nassif concluded that while “immigration can be among the most divisive and difficult to resolve in Washington,” this issue is decidedly non-partisan, as agricultural immigration reform is really about securing the future of American agriculture and, by extension, long-term U.S. food security.

Western Growers appreciates the efforts of Chairwoman Zoe Lofgren and Ranking Member Ken Buck to elevate the dialogue around this vital issue, and we look forward to working across the aisle to advance bipartisan legislation that provides our country and farmers with a legal, stable and reliable source of agricultural labor.