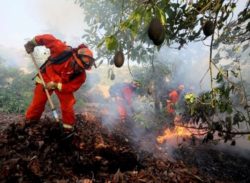 The Thomas Fire that burned through Ventura County last December led to some major agricultural losses. California Ag Today spoke with Henry Gonzales, the Agricultural Commissioner of Ventura County, about the situation.

“There were 6,603 acres of avocados and then another 1,800 acres of lemons, about another 540 acres of oranges, and another dozen crops were affected,” Gonzales said.

“One of the things that we've seen is that these orchards actually provided a buffer between the fire and urban areas. They really saved us quite a bit. Some of the avocado orchards experienced significant losses; the very efficient irrigation systems that we have are sadly made out of plastic, and so they melted and we're actually looking at two different disasters,” Gonzales explained.

“We're still suffering from the impacts and effects of the drought ... so everything was very dry, and then we had the Santa Ana winds, and it really created the perfect firestorm,” Gonzales said.

The rain this last year did help, but then it created more problems.

“It did help. No doubt. We didn't get as much rain as many other areas. In Southern California, we were very happy to get the amount of rain that we did get,” Gonzales said. "But then it created mudslides that we're now dealing with.”