The Story of Rising Fertilizer Prices

The Story of Rising Fertilizer Prices

High fertilizer prices in the past year have increased costs for farmers, but for some crops more than others. Multiple potential causes could explain these price increases, stemming from both supply and demand factors. If farmers respond to high prices by using less fertilizer per acre, it will provide an environmental benefit in the form of less nitrogen and phosphorus in streams, rivers, and lakes.

What caused these price increases, and how much do they matter?

Most fertilizers deliver one or more of the following macronutrients to plants: nitrogen (N), phosphorus (P), or potassium (K).

Nitrogen makes up three-quarters of the air we breathe and is essential in plant growth. However, atmospheric nitrogen needs to be converted to ammonia (NH3) before it is accessible to plants. This conversion process, known as fixation, occurs naturally through bacteria and archaea that live in the soil or in the roots of some plants. Animals also produce ammonia by eating nitrogen-laden plants and excreting manure.

These natural processes typically do not produce enough ammonia for crops to reach their maximum potential. The invention of the Haber-Bosch process in 1909 enabled the production of synthetic ammonia by reacting nitrogen with hydrogen under high heat and pressure. U.S. nitrogen producers use natural gas as an energy source in this process.

Phosphorus helps plants grow by promoting photosynthesis and other functions important for development. Phosphorus fertilizers are typically produced by mining phosphate rock and treating it with sulfuric or phosphoric acid, causing a chemical reaction that converts it to a form that can be absorbed by plants.

Potassium strengthens plants, making them resistant to disease and higher in quality. Potassium fertilizers are created by mining potash from deep underground, similar to table salt. Chemical reactions convert it into a form usable by plants.

It is impossible to apply the exact amount of fertilizer that plants require, and there is a perception that many farmers over-apply fertilizer because they fear yield and profit losses from applying too little. This extra fertilizer is sometimes called “insurance nitrogen.”

Nitrogen and phosphorus that are not taken up by plants often end up in waterways, where they can cause a massive overgrowth of algae, known as an algae bloom. Certain types of algae emit toxins that are absorbed by shellfish. Consuming these tainted shellfish can lead to stomach illness and short-term memory problems. Drinking or coming into contact with toxins from algae blooms can cause stomachaches, rashes, and more serious problems. Algae blooms also reduce the recreational value of lakes and rivers.

Nitrogen fertilizer use increased by a factor of four from 1960–1980, as shown in Figure 2. This increase coincided with dramatic increases in crop yields. In the 1970s, high agricultural commodity prices created a farm boom in which farmers planted more acres to crops and increased fertilizer applications.

After a slight drop during the farm crisis of the early 1980s, nitrogen fertilizer use has increased steadily, but at a slower rate than in the 1960s and 1970s. Phosphate and potash use has been relatively constant since 1985. Use of all fertilizers dropped substantially in 2009 after fertilizer prices increased fivefold during the 2008 commodity boom—a much larger increase than in 2021.

Two facts provide insight into the role of fertilizer in the U.S. farm economy. First, corn uses about 45% of each fertilizer type, yet it takes up only a quarter of all cropland—90 out of about 390 million cropland acres in the nation. Second, in 2020 fertilizer made up 35% of operating expenses for corn growers—more than any other crop. Fertilizer is a major expense for the biggest crop in the nation, so the 2021 fertilizer price increases will significantly raise the cost of growing it.

As Figure 3 shows, fertilizer makes up more than 25% of operating expenses for several other major crops, including barley, oats, sorghum, and wheat. Between them, these crops use an additional 50 million acres each year. 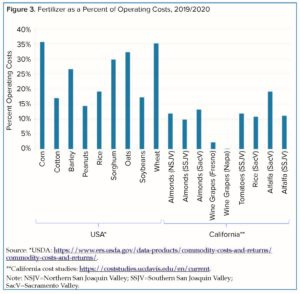 These percentages are useful for understanding the salience of fertilizer price increases for farmers. A jump in the price of one of your largest expense items will be noticed.

However, these percentages obscure the amount of fertilizer used on each crop because major national crops such as corn are relatively inexpensive to grow. Most corn is grown without irrigation, which saves the cost of acquiring and pumping water. Corn also requires little labor, especially now that tractors practically drive themselves.

According to cost and return studies by the University of California, bearing almonds cost $3,000–$4,000 per acre per year, which is about 10 times as much as growing corn in Illinois. So, although they spend a smaller percentage of their budget on fertilizer, California almond growers spend about three times as much per acre on fertilizer as Illinois corn growers, including about 25% more on nitrogen and multiple times more on potassium. 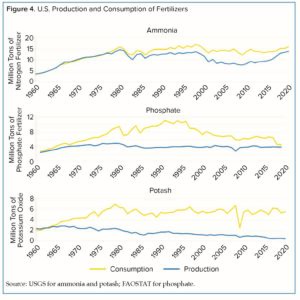 Most U.S. ammonia production capacity is in Louisiana, Oklahoma, and Texas—close to natural gas fields. Natural gas constitutes about 80% of the cost of producing ammonia. Domestic production declined substantially from 2000 to 2010, a period when U.S. natural gas prices were historically high. In the latter part of this decade, two major producers merged as part of a period of consolidation in the industry.

After 2010, the deployment of hydraulic fracturing (fracking) increased the supply of natural gas and thereby lowered the cost of production dramatically. Fertilizer prices, however, remained high in this period and U.S. firms enjoyed large margins. In the last five years, production has rebounded, as more plants were built to take advantage of cheap natural gas.

Ammonia imports have mirrored domestic production, increasing as production declined between 2000 and 2010 before declining when production rebounded after 2016. Two-thirds of U.S. imports come from Trinidad and Tobago, and most of the remainder comes from Canada.

U.S. potash production has declined by 80% since 1965. Most of the remaining U.S. production comes from deep mines in southeastern New Mexico. Most potash imports come from Canada, which is the world’s largest producer by a significant margin.

Most domestic phosphate is mined in Florida and North Carolina, although there is also some production in Idaho and Utah. U.S. phosphate production declined steadily from 1980–2019, but phosphate fertilizer use in U.S. agriculture remained relatively constant over this period.

Each year between 1980 and 2019, the  U.S. exported about half its phosphate production, mostly to Canada and Mexico. As production declined, the U.S. maintained domestic consumption by increasing imports, mostly from Morocco, Russia, and Israel. In March 2021, the U.S. International Trade Commission ruled that imports from Morocco and Russia had affected the U.S. producers adversely, and they imposed countervailing tariffs ranging from 9% to 47%.

So, why have prices increased? To answer this question, I consider supply- and demand-side factors.

On the supply side, U.S. natural gas prices doubled between the summer of 2020 and the end of 2021, which significantly raised the cost of nitrogen production. Energy is also a component of phosphate and potash mining costs, but it is much less important in the production of these products than for nitrogen. For this reason, the increasing price of natural gas cannot fully explain the fact that all fertilizers increased in price by a similar percentage.

Weather events also disrupted nitrogen supply, including the freeze in Texas in February 2021 and Hurricane Ida in August 2021. There were also some supply disruptions due to COVID-19. However, these events caused only a temporary reduction in production and so do not explain a sustained price increase. Moreover, these events did not hit phosphate and potash production regions.

Also on the supply side, shipping costs increased dramatically in 2021, especially on shipments from Asia to North America. However, most fertilizer imports to the U.S. come from the Americas and would be less affected by shipping costs.

On the demand side, crop prices are high. Corn, soybean, and wheat prices increased by 60% from the summer of 2020 through the end of 2021. High crop prices incentivize farmers to apply more fertilizer per acre, which would place pressure on fertilizer prices.

Moreover, to the extent that farmers apply more than the recommended amount of fertilizer as insurance against low yields, reducing use in 2022 provides an opportunity to experiment and to learn how much such insurance is necessary.