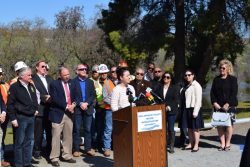 With the rising San Joaquin River in the background, board members of the San Joaquin Valley Water Infrastructure Authority (SJVWIA), assemblymen, city officials and stakeholders of the Temperance Flat project gathered recently to discuss the importance of flood control.

The Western Ag Processors Assocation (WAPA) Director of Regulatory Affairs Jodi Raley spoke at a recent news conference highlighting the impacts of flood damage as it relates to agriculture. Noting the acres of valuable agricultural land along the river, Raley expressed that while it is important for the future dam to capture water, this season, we are seeing how the project would play a critical role in flood control.

Many acres of orchards and fields have experienced saturation or an inundation of water during this heavy rain season. These conditions on an extreme not only lead to situations concerning crop health, but could also result in loss of jobs for ag workers in affected areas.

In addition, it was highlighted that the amount of water released from Friant, currently 9,000 cubic feet/sec (cfs), has very little to no demand. It is being said that with the rain received and the significant snow pack in the Sierras, Millerton Lake will receive enough water to be drained and refilled seven times over.

The SJVWIA and the Technical Advisory Committee, along with the large breadth of stakeholders, are calling upon Governor Brown to recognize the need for this project’s construction. Raley said that the association will continue to push and fight for the construction of Temperance Flat to bring more water not only to the Central Valley, but to the entire state.