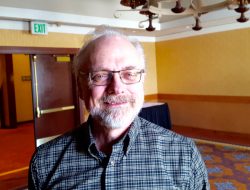 Phil Simon is a carrot breeder and geneticist with the USDA Ag Research Service based at the University of Wisconsin. He produces the vast majority of carrots for the consumers throughout the nation. A big goal is to find a commercial carrot variety that is root-knot nematode resistant. Nematodes are a soil-borne, microscope, worm-like organism destroying production in some fields. Through lots of research, the carrot industry is getting closer to a resistant variety.

The Brazilian variety is not suited to California because it is shorter and wider. It does not look like a California carrot, and it bolts very easy, which means it flowers and goes to seed. But with the Brazilian carrot having nematode resistance, it is also heat-tolerant, which is great news for us in California, especially with the rising temperatures.

It is said that California is getting closer and closer to getting its own commercial variety. “We’ve also found genes for resistance in other carrots from around the world, from Syria, China, Europe, and we intercrossed those also into California, so we’re putting a couple of genes in,” he said.

With all of these genes, this makes for an even stronger and durable resistance to nematodes.