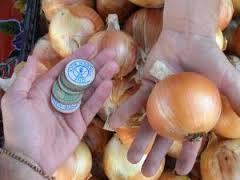 With tight budgets and children to feed, recipients of federal nutrition assistance were rarely seen at farmers markets, where the words “affordable” and “fresh” didn’t often mix. That is changing, thanks to a state program that is in line to get a big boost in federal support.

More and more recipients are stepping up to market managers’ tables, swiping their card from CalFresh (nationally known as SNAP or Supplemental Nutrition Assistance Program), and getting a bonus good for fresh produce.Under the Market Match Program, CalFresh recipients can get $10 a week in bonus scrip for fruits and vegetables for every $10 they spend at farmers markets. Over 30,000 CalFresh participants have used the scrip at 130 markets statewide, creating more than $1 million in additional income for farmers at these markets.

Locally, the bonuses are available at a number of farmers markets, including Altadena, Long Beach and Canoga Park. Federal and state officials are trying to expand the bonuses to other farmers markets to help stem an old problem: low-income recipients using federal nutrition assistance to purchase unhealthful products, particularly high-sugar sodas and junk food.

The matching money comes from the California Market Match Consortium, which was founded five years ago by farmers market operators and community organizations. The consortium is funded by the California Department of Food and Agriculture and a variety of private donors. Recently the Los Angeles County agency First 5 LA, which draws on tobacco tax money to help programs benefitting young children, became a partner.

More funding is on the way. The 2014 Farm Bill allocated $100 million over the next five years for incentive programs. A new California Assembly bill proposes a Market Match Nutrition Incentive Fund of $2.75 million per year for five years, to maximize capture of federal dollars. With these funds, all 854 markets in California could participate. SNAP, formerly known as food stamps, feeds one in seven people in the nation. It dispenses $8 billion in California. But beneficiaries of the program, especially children, also suffer high rates of obesity and diabetes, which have been linked to cheaper, sugary foods.

California has the most cases of diabetics in the nation, and spending in the state to treat the disease in 2012 approached $28 billion, according to American Diabetes Association data. New York City tried to ban the use of SNAP funds for buying high-sugar drinks in 2010. Beverage manufacturers and some civil libertarians objected, and the U.S. Department of Agriculture, which runs SNAP, vetoed the idea.

In lieu of curbing the supply of junk food — a politically unattractive option — public health advocates are working hard to change the demand by making healthful foods cheaper and more attractive.

Carle Brinkman of the Berkeley-based Ecology Center, which assists farmers markets statewide with implementation of electronic benefit transfer programs, said, “Instead of being punitive, we like to incentivize (healthful) food choices. We can give customers who wouldn’t normally shop at farmers markets a boost, and at the same time, send additional funds to small- and medium-size farmers.”

The question now is: Will the incentives change decades of entrenched habits? Initial signs are positive. In Massachusetts, a USDA Healthy Incentives pilot project followed 55,000 SNAP households for a year; some were credited with 30 cents for every dollar spent on targeted produce. Spending on fruits and vegetables was higher for those receiving incentives at a rate that was both “statistically significant and … nutritionally relevant,” the study concluded.

And a recent survey by the California Consortium found that nearly 3 of 4 Market Match shoppers came specifically for the match. They leave with bags of fresh produce and new ideas from nutrition classes frequently held in conjunction with Market Match.

At one market recently, a rapt audience of about 20 women and children absorbed a “Rethink Your Drink” lesson as a dietitian stirred a frosty pitcher of ice water laced with mint and cucumber slices. Delicious, several women agreed, and even cheaper than soda.