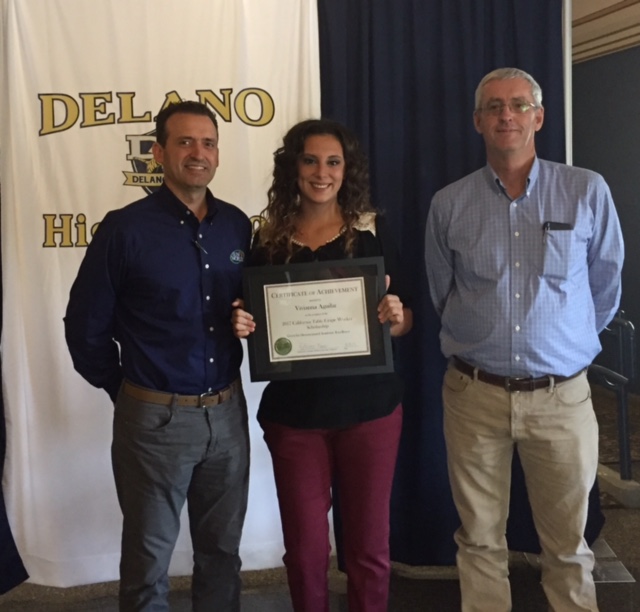 All recipients will be attending California universities or colleges.

Here are the 2017 scholarship recipients:

Mr. Jose Aldaco is a graduate of McFarland High School. Jose plans to attend Butte College and pursue a career as a certified welder. Jose is an active FFA member and won several awards for woodworking. Jose’s mother, Maria Navarro worked for Sun Pacific in 2016.

(Jose is pictured with Nathan Longcrier of Sun Pacific Shippers).

Ms. Vivianna Aguilar is a graduate of Delano High School. Vivianna will attend Porterville College with a career goal of becoming a nurse. Vivianna was the most valuable player for the Delano High girls varsity basketball team and volunteers at local hospitals and senior retirement homes. Vivianna’s mother, Esperanza Aguilar, worked for Sun World International in 2016.

Mr. Juan Frausto is a graduate of Dinuba High School. Juan will attend Reedley College and plans to pursue a career in fruit sales or farm/ranch management. Juan is very active in special school programs related to agriculture including farm management, tree and vine management and is also involved in his local church. Juan’s mother, Julieta Marquez worked for several table grape growers in 2016.

(Juan is pictured with Gary Gipson with Gipson Farms).

Mr. Daniel Flores is a graduate of Robert F. Kennedy High School in Delano with a weighted GPA of 4.29. Daniel plans to attend the University of Southern California and major in microbiology with a career goal of becoming an oncologist. Daniel chose this career after his mother died suddenly from cancer. Daniel received the Superintendent’s Gold Award all four years in high school, was the captain of the school’s varsity baseball, football and basketball team and is also a youth leader at Guadalupe Catholic Church. Daniel’s father, Jesus Flores, recently retired from Pandol Brothers Farms.

Ms. Guadalupe Sandoval is graduating from Desert Mirage High School as the class valedictorian with a 4.40 weighted GPA. Guadalupe plans to attend UCLA where she will major in biology with a career goal of becoming a pediatric surgeon. Guadalupe is a member of the junior varsity volleyball team and tutors and translates at elementary and junior high schools. Guadalupe’s mother, Modesta Aguilar, currently works for Lucich Farms.

Ms. Rosa Linda Lopez plans to attend University of California Berkeley where she will major in mathematics with a career goal of becoming a financial analyst. Rosa is the student body president at McFarland High School and is graduating with a weighted GPA of 4.28. Rosa volunteered for Special Olympics and the McFarland Police Department. Rosa’s mother, Francisca, worked for several table grape growers during the 2016 season.

Mr. Omar Deion Perkins is a graduate of Cesar Chavez High School in Delano. Deion will graduate with a weighted GPA of 3.91. Deion plans to attend University of California Santa Barbara and will major in political science/communications with a career goal of working in food safety and marketing. Deion is a member of mock trial, and a four year member of the football team.

Ms. Sandra Gaylord is a graduate of Golden West High School with a weighted GPA of 3.92. Sandra plans to attend Fresno State where she will major in plant science and botany, and has a career goal of being a pest control advisor and certified crop advisor. Sandra is involved in FFA and volunteers at Food Link programs in Tulare County.

Ms. Jewlia Winter is a graduate of Selma High School with a weighted GPA of 3.88. She plans to attend Fresno State and major in agriculture education, with a career goal of becoming an agriculture teacher. Jewlia is a member of FFA and also serves as a tutor.