A Start on Comprehensive Immigration Reform? 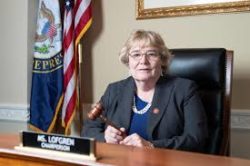 A Start on Comprehensive Immigration Reform?

Lofgren introduced the Farm Workforce Modernization Act to the House of Representatives.

This is an immigration reform bill to improve agricultural job opportunities, benefits, and security for undocumented workers in the United States. This bill also allows for the petition of spouses and children to be granted status and includes a revamping of the current agricultural guest worker program, known as H2-A.

Manuel Cunha, Jr., President of Nisei Farmers League, praised representative Lofgren, "Congresswoman Lofgren has worked tirelessly and is committed to getting much-needed immigration reform, which has been long over-due. She is working with other representatives in our Valley, including Congressmen Costa, Panetta and LaMalfa, Cox and Harder, who also believe our hard-working laborers and their families must feel safe and be granted legal status," noted Cunha.
“Lofgren’s Committee deals with agricultural workers here, taking care of them and their immediate family. If it's the wife or the husband or the kids, they will have an opportunity to become a Blue Cardholder, then eventually go into a permanent green card,” explained Cunha. The Blue Card it temporary.

“And down the road, if they wish to apply for citizenship, they could because that's already in the law,” Cunha said

So in that, now what happens is that the house judiciary committee did an ag piece to take care of the current workers here, getting them into status, as long as there are no criminal records. And they've had to work in agriculture for a minimum of a hundred days a year.

This process represents 1.6 million farmworkers in the US, which California has about 500,000.

If we run short of workers, then we have a guest worker provision. The old H-2A is being modified. And that would allow those workers to come into work in the US up to 10 months, in some cases up to 36 months Those folks after eight years would be eligible to apply for the Blue Card of residency. So there's a place even for those H-2A people down the line.

“Now there's a catch to all of this and the catch for agriculture is that at the end, let's say they give us three years to get everybody signed up into the blue card; those people then have this three years already, the agriculture industry would have to go into E-Verify. So, in other words, we would now be responsible for every worker hired after the third year. After the third year, we have to go into E-Verify every farmer, and every labor contractor would have to be registered in E-Verified,” explained Cunha.

Another objective would streamline the I-9 check “The grower would be able to scan your blue card, and it would have all the information necessary for the I-9, and it would meet that obligation. So the Farm Workforce Modernization Act will do some things that are innovative to take a lot of paperwork away from having to do things over and over again,” noted Cunha.

Once the Farm Workforce Modernization Act passes the House, it will go the Senate. It will need to concur with the Senate's plan. “And upon doing that, making the changes and making sure we have the correct definition for agriculture because right now it's too narrow, but it needs to be broadened a little bit. For the ag industry, the Senate's side would be done.

And then when they go back to the house side, where the members will work together through the deals, get everything ironed out, and then after that happens, there are two other bills over in the Senate that have to move at the same time. And that's the Dreamers and the temporary protective-status (TPS) people. This is for people from countries that were having civil war and unrest, where thousands and thousands of people would be killed. They came here for protection. Those people's visas would be extended.

“Then we come back later next year we start helping the undocumented in construction and manufacturing. So we start inching away at each of these industries,” Cunha said.

“But if you do dreamers, you do TPS's, and you do agriculture, you're probably going to take away around three and a half to 4 million of the 8 million undocumented workers,” Cunha noted. “And that’s a big dent into that program.”