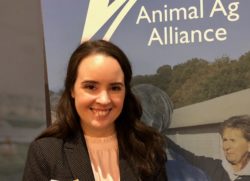 58
SHARES
ShareTweetSend to a friend

In the age of social media, facilitating the connection between producer and consumer is more accessible than ever. Casey Kinler, Communications Manager with the Animal Ag Alliance based out of Arlington, Virginia, is not only urging farmers to jump on board the social media craze but is also focusing on helping zealous educators develop their message.

“Now more than ever, it is really important for individual farmers and ranchers to be on social media,” Kinler said.

Although this may be foreign territory for some, she recommends beginning with only one platform such as Facebook because it offers the biggest reach of people

To take it one step further, the Ag Alliance also works with college students, hosting an online scholarship competition where the goal is to teach them how to effectively communicate about animal agriculture. They just celebrated their 10th anniversary of the competition, where over 430 individuals from more than 40 different states participated.

“It’s really important for farmers to get out there and share what they’re doing on their farm and make sure that people in their community know that they are a trusted source.”