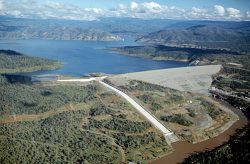 139
SHARES
ShareTweetSend to a friend

Were Fish Cause of Oroville Dam Disaster?

Reportedly, an effort to save millions of salmonoid fish below the Oroville dam may have caused a delay in releasing water from Oroville Dam on February 12. It set up the evacuation of at least 188,000 people in the area after authorities warned of an emergency spillway in the structure was in danger of failing and unleashing uncontrolled floods of water on towns below.

It was a near disaster and would have taken agricultural irrigation water with it, which has a lot of people asking questions. One person is Edward Needham. He provides agricultural services for growers throughout the state.

“I was trying to figure out what the missing piece was, why they could all of a sudden release 100,000 CFS and go from 65,000 to 100,000,” he said. Needham had spoken with a friend who worked at the refuge that day, who had told him he had been down at the fish hatchery, cleaning it out and saving all of the salmon.

“You're telling me that they delayed the releases on the dam to save the four million salmon that were downstream?” Needham asked.

That may be correct! Many local news stations had reported that approximately 40 employees from the refuge were saving the salmon and loading them into trucks to be hauled away.

“That was two days before the dam nearly failed because of all the water it was holding back” Needham remarked.