Ron Fisher, A Veteran in the California Almond Industry 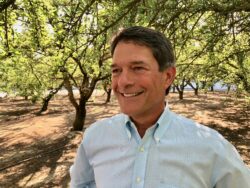 Ron Fisher, A Veteran in the California Almond Industry

By Patrick Cavanaugh with the Ag Infomation Network

Ron Fisher is the founder and CEO and president of Fisher Nut Company based in the Modesto area. He's been a veteran of the California almond industry since 1980. Here's his story.

“I started in 1980, working for a company and agriculture was having a tough time all through the eighties. And I saw an opportunity for an independent packer to come into the business that would offer faster cash flow and competitive prices because in the late eighties, the growers were really hurting with high-interest rates,” explained Fisher

Commodity prices were low as well.

“I launched out on my own and opened up an almond processing company that accommodated what the growers needed. And we were able to utilize some of the faster-paying markets to get some cash-flow to the growers that were hurting, to get them through that tough period,” noted Fisher

“And so at that time, we started growing through the benefit of all that. And we were able to offer the growers a slightly different service than was available at that time,” he noted.

“I believe, at the time, there were about 35 handlers in the business. And from there, we were able to grow from our success of accommodating that. And as the industry changed and morphed into a better economic situation where prices were going up and people were planting, more almonds, where water and labor were available. The almond industry within the Central Valley boomed and with that, our company did as well,” he said.