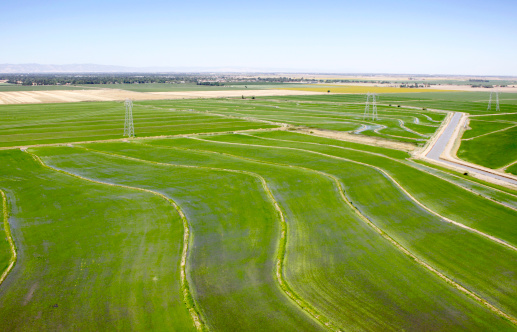 Kirk Messick, Senior Vice President, Farmers Rice Cooperative in Sacramento, reviewed the water allocations announced last Friday. “The federal water districts have allocated 75% and the state has allocated 100%; however, the districts on the state side are planning to sell 20% of their water to growers who have permanent crops, such as people in the San Joaquin area.”

Messick says rice growers will plant 60 - 65% of their rice acreage, compared to last year, and he thinks there will be quite a movement of federal water towards permanent crops.

Rice growers in northern California are selling their water to growers who need water for permanent crops. Messick said, “Rice farmers are diverting water to San Joaquin, in general, especially to those along the Westside who lack water. They are even providing water to farmers in the north for young permanent crops such as walnut trees, pistachio trees, grapevines, etc.”

Messick is worried rice growers will not meet the demand for the rice industry this year because they can make more money by conveying their water elsewhere. “They’re being offered $1500 an acre-foot, and they cannot make that money with rice. They have the right to move the water, and the state is encouraging it because it wants the water to go to the highest and best use, whether for permanent tree crops or urban use. Other water recipients may pay $2-3,000 per acre.

“Though the state has allocated 100% water for ag use in northern California,” Messick continued, “we know already that 6 of the 15 districts in the state system are going to sell 20% of their water, and that’s the minimum.”

Messick expressed concern “that we will not meet some of our markets, particularly the Middle East or those with less money to spend. Some markets will have to buy from other suppliers in the world.”

“We’re better off than a month ago,” Messick reasoned, “because we didn’t know if we would have any water so decisions to sell water have come up.”

“But,” he said, “there’s a lot more going on with competitive medium-grain rice growers facing droughts in the rest of the world, such as in Australia, Turkey, and Egypt. These droughts will cause dramatic cutbacks in rice planting overseas.”

Back at home, Messick is concerned about 2015, “because we have less than 15% snowpack compared to normal, and very low levels in both Shasta and Oroville—and we haven’t even started to use any water for agriculture.”