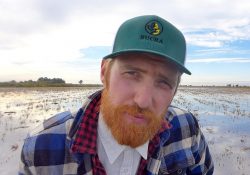 Rice Farming TV Gets The Views

By Tim Hammerich with the AgInformation Network

According to YouTube, 1 billion hours of video are watched on their platform every day. This has created an opportunity for some farmers to invite viewers in to see how their food is grown.

One of my favorites is called Rice Farming TV, created by 3rd Generation Gridley Rice Farmer Matthew Sligar. Matthew discovered that he really enjoyed the film making process, and always found striking images he wanted to capture around his farm in Northern California. As he started sharing his videos, he kept getting asked questions from the viewing public.

"For example, what's the difference between white and brown rice? It's the same rice plant. It's just milled differently. So a lot of people would ask me, "what do you farm? White or Brown rice? And the answer is both. And that always kind of took people by surprise, and I thought, wow, people are interested in the rice industry,"said Sliger. "They don't maybe know that much in terms of how it's produced. In fact, a lot of people, even in California, don't know that rice is grown in California. So there's this public education, this storytelling, this filming, the visual storytelling. All this together kind of led me to start Rice Farming TV.”

The channel, which now has over 32,000 subscribers, shares Matthew’s day-to-day life on the farm. It also serves as a platform to answer questions about issues such as water, the nutrition of rice, wildlife conservation, and rural living.

When asked how other farmers might create similar platforms themselves, Sligar says he considers film making his art form, but any form of expression online or not, can be an effective tool to connect about agriculture.