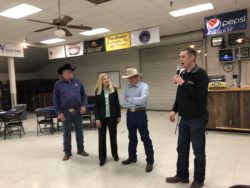 Les and Marilyn Wright To Retire and Relocate to Nebraska

Nearly 100 people gathered at the Clovis Rodeo Hall to honor Les and Marilyn Wright, who have served faithfully as Ag Commissioners in Fresno and Tulare Counties, respectively. These two counties, along with Kern County, have consistently been among the nation’s top three agricultural counties.

Together, they will relocate to the beautifully mountainous Sioux County, in the far northeastern part of Nebraska, where the population density is one person per square mile. This represents a return to Marilyn’s home state, where she grew up on a farm and studied agronomy at the University of Nebraska and Arkansas State University.

Highlights of Marilyn’s career include implementing an aggressive county-wide walnut theft ordinance and taking in more than 113,000 pounds of outdated pesticide products from Tulare County growers during her department’s Legacy Pesticide Disposal Event in 2018.

Les Wright was raised on a cattle ranch in northern California. Instantly, upon becoming Ag Commissioner Fresno County, he helped navigate county farmers through one of the worst droughts in state history.

Both Ag Commissioners have worked diligently to control populations of Asian Citrus Psyllids, which vector the Huanglongbing (HLB) disease in citrus. To date, no positive HLB trees in commercial citrus have been detected in the Valley’s billion-dollar citrus industry.

“It’s been a fun ride on most days over the years,” said Marilyn. “Some nights my brain was still working at 2 am, and I will not miss those days. I will also not miss the anti-pesticide crowd.”

“Yes it has been one heck of a ride,” said Les. “I’m grateful for the friends and colleagues that believed and fought the way we did for the ag industry in Fresno County. I have been fortunate these last few years, because my wife, Marilyn, was Ag Commissioner for Tulare County. We were able to travel to Washington D.C. and Sacramento together. It has been fun,” Les said

In honor of Les and Marilyn Wright’s service, funds are being raised to support the Fresno State Rodeo Team. Rodeoing is one of Les’ passions.

Rodeo has a long history at Fresno State; it is the University’s oldest club sport, with a rodeo held every year since 1949. A recent generous family foundation with local ties made a $250,000 gift to establish an endowment for the Fresno State Bulldoggers Rodeo Team and committed to match an additional $500,000 if that amount is raised by May 2019. If you are interested in supporting the team in honor of les and Marilyn Wright, please contact the Ag One Foundation at 559-278-4266 or visit www.fresnostate.edu/jcast/agonefoundation.