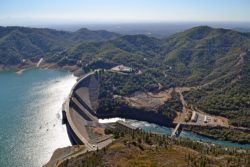 171
SHARES
ShareTweetSend to a friend

“With the signing of this bill into law, we are bringing water home to the Valley,” Denham said. “I’ve been fighting since day one in Washington to build more water storage for our farmers and neighbors. Today, we celebrate future generations having access to the water they need and deserve.”

Denham’s New WATER Act provides financing for water projects throughout the western United States, including new reservoirs, below ground storage projects, recycling, and desalination projects. For Sites Reservoir alone, this policy will save hundreds of millions of dollars in construction costs and significantly lower prices for water users.

In California and across the west, this means billions of dollars saved as we build the necessary infrastructure to capture the plentiful run-off from the Sierras, which can be used to irrigate the Valley and save for the dry years. During the rains of 2017, we saw how our inadequate storage quickly filled reservoirs, wasting water, and led to flooding and levee breaches—issues Denham secured language for in the WRDA bill.

Additionally, the bill enhances long-delayed and badly needed local flood protection for more than 50,000 Valley residents. Rep. Denham hosted the highest ranking civilian responsible for water infrastructure in the Army Corps of Engineers, Assistant Secretary of the Army for Civil Works Rickey “R.D.” James, in Manteca recently to ensure quick completion of ongoing construction and prioritization of the projects in the bill.

The Army Corps is responsible for managing these projects, and R.D. James saw firsthand how critical water infrastructure is in Stanislaus and San Joaquin County, including the levees near Manteca that were breached in 2017. These levees are currently being restored with federal funding.

To build upon these infrastructure improvements, additional Denham language in the WRDA bill makes additional levee authorizations in San Joaquin County eligible for federal resources to protect our communities. Denham also included language to expedite the feasibility study of the Mossdale Tract, or Reclamation District 17, which includes the French Camp veterans treatment facility.