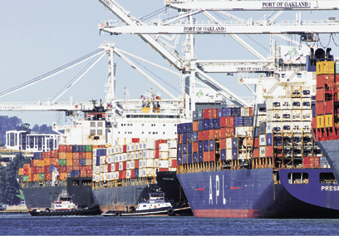 Tree nuts, fresh produce, dairy products and other California farm commodities struggle to find rides on vessels and containers in which to ship them, with ocean carriers rushing to set sail empty rather than hauling agricultural exports.

“We have 50 loads packed and ready to ship, that customers would take tomorrow, that we can’t get on the ship,” said Bill Carriere, a Glenn County walnut grower and handler.

Agricultural exporters say their shipping problems—which trace to pandemic-related supply-chain disruptions that started in 2020—have only gotten worse. More shipping companies have notified them that they won’t stop at the Port of Oakland to pick up containerized farm products, which account for 60% of total exports through the port. The companies opt instead to return ships directly to Asia following long delays in the ports of Los Angeles and Long Beach.

Only one ocean carrier—Mediterranean Shipping Co.—so far has committed to servicing the Port of Oakland, said Roger Isom, president and CEO of the Western Agricultural Processors Association and California Cotton Ginners and Growers Association.

The Northern California port saw 67,910 empty containers leave its shores during the first two months of this year. That’s compared to 37,263 empties during the same time in 2020, according to a letter that agricultural groups, including the California Farm Bureau, sent to the Biden administration last week. The letter further noted that three out of four containers at U.S. ports return to Asia empty.

Because ships continue to bypass the Oakland port, exporters say the opening in March of a new “pop-up” yard for pickup of empty containers has offered limited relief. The temporary hub, located offsite of the port, allows shippers to stage export loads while avoiding busy marine terminals where most empty containers are stored.

As of last week, there were more than 500 containers in the yard, said port spokesman Robert Bernardo. The port saw 83 ships stopping in Oakland in March, compared to 93 a year ago. Reduced vessel arrivals were due in part to a COVID-related port shutdown in Shanghai, the port said.

Though the port has enough empty containers to cover current demand, Bernardo said supplies remain “in constant flux.” He said he expects inventory to tighten as imports from China begin to resume.

Aside from dealing with a shortage of containers, agricultural shippers say they struggle to secure bookings, which often get canceled or “rolled,” meaning the cargo wasn’t loaded onto the scheduled vessel, usually because there’s no room.