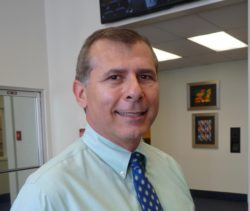 Possible Pollination Issues That May Affect the 2020 Pistachio Crop

Richard Matoian is Executive Director of the American Pistachio Growers Association based in Fresno.

“I've heard from some growers that there appears to be some uneven growth in the pollenization aspect from the male trees. The females came out when they did, it was the males that some trees came out normally within the orchard and yet other trees were held back a little bit,” explained Matoian.

“And the question is, was that a lack of chill hours or was that just some seasonal or springtime abnormality as those trees were pushing out? And so that remains to be the question,” Matoian said. “And so as a result, what I've heard is that some orchards, particularly on the West Side of the San Joaquin Valley, do not appear to have as large a crop as they had expected them to have. The thinking is there was just maybe some cool weather, right when the trees were starting to bloom,” he said

He said there was a string of rainy and cold weather. “And maybe that through the trees back into a little bit of a shock of sorts and it’s just hard to tell what exactly it was,” Matoian said. “Everyone believes that going into the year there was enough chill hours.”

Will that affect a billion pound prediction of this year? Time will tell.