New Officers and Board Members At Calif. Farmland Trust 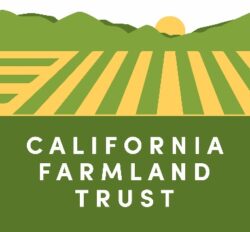 New Officers and Board Members At Calif. Farmland Trust

With a passion for preserving California’s farmland, California Farmland Trust (CFT) is proud to share the results of those elected to serve our Board of Directors as well as new board member appointments.

“We’re honored to have such well-known and well-respected individuals serve on the CFT board” shared Charlotte Mitchell, CFT Executive Director. “Our board members each bring professional skills and a passion for agriculture that serve in furthering our mission and protecting farmland.”

Jon Harvey retired from Cisco as a Hardware Engineer Manager and is now a ski patroller at Sugar Bowl. A former board member of Brentwood Ag Land Trust (BALT), Harvey joined the CFT board in 2018, following the BALT and Central Valley Farmland Trust merger that formed California Farmland Trust. Harvey became immersed in land conservation at a young age, when he recognized the connections between his appreciation for wildlife, a family history of farming, and his love for fresh food.

Patrick Johnston lives in Brentwood where his family has farmed since 1923. He is currently a partner in Dwelley Family Farms, growing both conventional and organic fruits and vegetables. He was a board member of the Brentwood Agricultural Land Trust, until its merger with Central Valley Farmland Trust to form CFT.

Ken Oneto resides in Elk Grove where he grows cherries, walnuts, dry beans, tomatoes and wine grapes on the family farm. He is a graduate of the California Ag Resources Training Program and the Ag Leadership Program. He was a founding member of the Sacramento Valley Ag Land Conservancy which helped to form the Central Valley Farmland Trust, and currently serves as the President of the Sacramento County Farm Bureau.

Ryan Jacobsen resides in Fresno, where he currently serves as the CEO of the Fresno County Farm Bureau. He is the first board member to serve the organization from Fresno County. Jacobsen currently serves as president of the Fresno Irrigation District Board of Directors, secretary/treasurer of the Kings River Water Association and president-elect of the Rotary Club of Fresno. He is also the host of the television show, Valley's Gold.

Theresa Kiehn is the Acting President and Chief Executive Officer of AgSafe. Her career also included a tenure with the Great Valley Center, where she supported the formation of the Central Valley Farmland Trust. In addition to her current role, she serves on the Turlock Farmers Market Board of Directors, the Salas Family Foundation, is a member of Modesto Downtown Rotary and is engaged in a variety of capacities with her faith-based community.