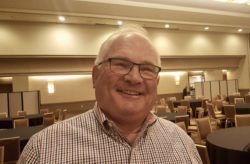 California Ag Today recently interviewed Joel Nelsen, president and CEO of the California Citrus Mutual. He spoke on his recent trip to UC Riverside about the Citrus Health Response Program. While speaking with USDA, they discussed the game plans that will be used to battle Huanglongbing (HLB) disease, which is vectored by an invasive insect called Asian Citrus Psyllid.

“We got into it, which I thought was an interesting discussion. What would growers do if in fact HLB was discovered in a grower’s orchard and what would the be obligated to do,” Nelsen said.

“And what came out of that discussion is that we are going to work with the USDA. We're going to develop a war game scenario. We're going to bring people into a room and start talking about it, just to see what the reactions were, and we're going to challenge these individuals to do what needs to be done,” Nelsen explained. “We're just going to have to figure out how best to address the industry and areas like this.”

Nelsen said that they discussed whether or not there was enough being done in that partnership with the homeowner. “We came to the conclusion that no, quite frankly the industry has been carrying that ball and that USDA and CDFA can do a little bit more in their role as government"

“We talked about the continued trees being removed, and everybody was satisfied about that. We talked about whether or not beneficial insects can help in this situation. Surprisingly, the answer was pretty much no,” Nelsen explained. “Beneficial releases may help in an urban environment to a small extent, but from a commercial standpoint, it doesn't help. So there were a lot of discussions, some debate, and most of all, some camaraderie that was developed as far as going forward.”

Nearly 400 trees in front and back yards of homes have been destroyed due to testing positive to HLB disease.

“They're all in a clearly defined geographical area in Southern California,” Nelsen said. “So what we have is a lot of backyard adventures that bring in rootstock that unfortunately was diseased, and as a result of that, those individuals are the ones that are seeing problems associated with their own trees.”