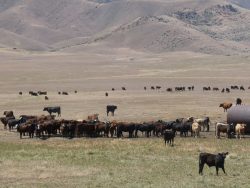 82
SHARES
ShareTweetSend to a friend

Lowell Catlett, who is a Regents Professor emeritus in Agricultural Economics and Agricultural Business and Extension Economics and was the Dean of the College of Agricultural, Consumer and Environmental Sciences at New Mexico State University until he retired in 2015, told California Ag Today that increased income for the lower to middle classes is leading to an increase in meat consumption.

“As their incomes rise and they want to change their diets,” Catlett explained, “the first change they want to make is meat-based proteins. When we [isolate] just the income effect of the world getting more money, we must increase global meat output in the next 20 years by 50 percent. As of 2014, the average adult American consumed approximately 198 pounds of meat annually. By 2024, that number is expected to rise to 207.5 pounds."

A surge in meat consumption requires increased grazing acreage for those production animals. “If the world grows to 9 billion people,” Catlett said, “we must double meat-based proteins — whatever they may be. I maintain most will come from intensive animal operations that are well-managed, more efficient, have a small impact on the environment, and cater to the overall physical health of the animal.”

“We'll be doing most of that global meat supply in the United States because we have the infrastructure to provide those intensive animal operations,” Catlett said.