Lawmakers Unite and Urge Administration to Capture Water from Storm 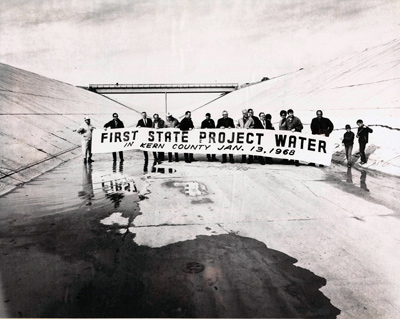 Lawmakers Unite and Urge Administration to Capture Water from Storm

Senator Dianne Feinstein and Congressmen Ken Calvert, Jim Costa, Jeff Denham, Kevin McCarthy, Devin Nunes and David Valadao TODAY sent a letter to Interior Secretary Jewell and Commerce Secretary Pritzker calling on their departments to evaluate the operating criteria that govern the Central Valley Project and the State Water Project in order to capture as much water as possible from this week’s storm.

Full text of the letter follows:

Department of the Interior

We are writing to urge you to immediately evaluate the operating criteria that govern the Central Valley Project (CVP) and the State Water Project (SWP) so that actions can be taken as soon as possible to capture the maximum amount of water from this week’s storm in California.

We begin by contrasting two different circumstances under the drought:

These numbers show that existing protections for endangered fish are more than adequate. On the other hand, our constituents’ farms and communities are facing potential devastation. From our view, it is apparent that there is a significant imbalance of regulatory burdens.

Let us be clear: A disaster of great magnitude has been unfolding in our communities, and will continue to worsen with each passing day if relief is not provided.

Ever since the State’s drought declaration on January 17, 2014, there have only been two major storms in California. With much of the rain season behind us, California has received only about 50 percent of normal precipitation. The principal reservoirs for the CVP and SWP – Shasta and Lake Oroville – and San Luis Reservoir in the South Delta are still below 50 percent of capacity, and the snowpack is less than 25 percent of normal.

Farms and communities north and south of the Delta are suffering from the drought’s severe effects. Besides lost or fallowed acreage and damage to livestock, highly valuable trees and vines are being cut down. The socioeconomic impacts – such as unemployment – will be disastrous.

Based on historical weather patterns, these storms could be our last chance this year to receive, capture, and move a sizable amount of water to those farms and communities that desperately need it for public health and safety and for their livelihoods that are under severe threat.

Biological opinions issued by your Departments regulate the amount of water that can be exported from the Sacramento-San Joaquin Delta in order to protect endangered fish. However, based on the data we cited above, there is clearly no imminent threat to any of the key protected fish species that is attributable to water pumping operations.

We understand that your Departments have to consider other factors, such as salinity levels in the Delta and the need for pulse flows. Still, this latest data strongly suggest that there is significant leeway for the Bureau of Reclamation, the U.S. Fish and Wildlife Service, and the National Marine Fisheries Service to alter current water operations to benefit water users without risking jeopardy to protected species.

This latest rainstorm is occurring as we speak. You have authority under the law and, we assert, the obligation, to immediately take advantage of the rare, and likely the last, opportunity this year to capture and move water to bring relief to millions of Californians, and to mitigate the large-scale drought disaster that has struck our State. We urge you in the strongest terms to take action without delay.

Thank you for your urgent attention to this very important matter.